BYOD (Bring Your Own Drone!) 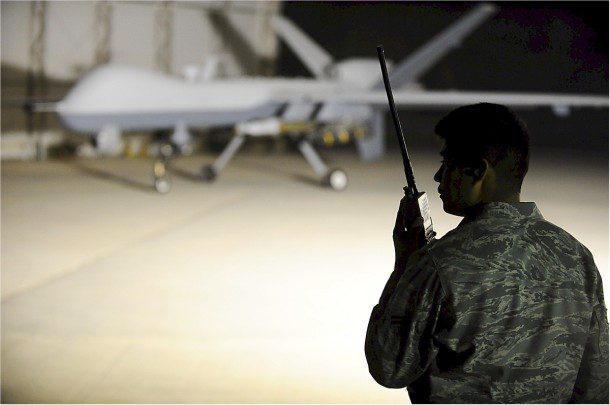 The field of unmanned aircraft systems (UASs) is one of the fastest-growing geospatial technology sectors in defense and civilian applications as well as in personal-use markets. In the last few years, UAS sizes and types have evolved rapidly, but generally they can be categorized into fixed-wing, helicopter (single or multirotor) and aerostats (blimps).

Smaller systems have seen dramatic improvements in ease of use and reliability as well decreased price. This trend makes UAS use more affordable to state and local governments, private companies and even individuals.

In addition, the quality of imagery and video information collected from these aerial platforms is improving. Thus, the number of applications and the demand for computer systems that can manage, analyze and share the imagery and video being collected are on the rise.

A wide variety of UAS applications exist beyond known military and intelligence uses. Missions focused on collecting video or imagery include security monitoring (border control and maritime patrol), disaster relief, police, search and rescue, forest fire detection, precision agriculture, and infrastructure and utility inspections. As such aircraft continue to be outfitted with a wider variety of sensors, such as light detection and ranging (LiDAR) technology and radar, the number of applications will increase even further. For example, recently it was announced the U.S. government is providing a drone and a support team to help search for kidnapped schoolgirls in Nigeria.

Beyond collecting video or imagery, researchers also are exploring a variety of other applications in this field. Smaller UAS vehicles are best suited for delivering time-sensitive, lightweight payloads 2-3 miles from the launch point, as the range of smaller drones is limited by battery life.
Examples of these types of missions include delivering medicines and critical documents. Information released earlier this year from a United Arab Emirates government summit points to the development of small-scale drones for such purposes.

Even with these types of payload delivery missions, the use of real-time video is crucial for remotely piloted drones. In addition, once UAS technology advances to the point of completely automated flight, onboard use of sensors for collision avoidance and possibly object and feature recognition will continue to advance.

To ensure broad applicability of such systems, the geospatial industry needs to focus on developing computer and software applications that can integrate the data collected from UAS platforms with other forms of geospatial information. By displaying live video feeds over a satellite image and other mapping information, such as street centerlines, place names and points of interest, an operator can become better oriented to a digital environment and make better decisions regarding the drone's flight path or sensor operations. 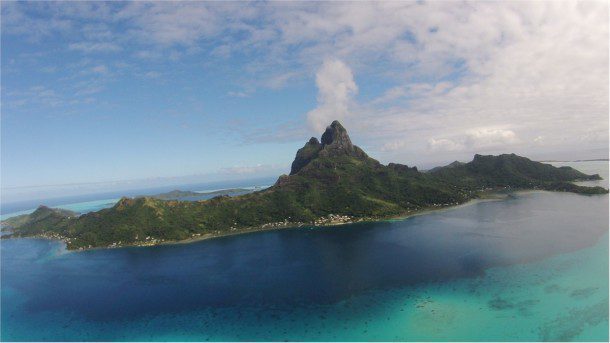 A view from the author's personal drone reveals Mount Otemanu on Bora Bora.

Additional geospatial information also provides operators with a vastly improved understanding of the objects and activities viewed by the UAS. For example, Intergraph's Motion Video Exploitation (MVE) system treats video as just another geospatial data type, meaning the data can be searched, layered and integrated. Raw video can be displayed in a standalone video window or projected into a map window for geospatial orientation and context.Â  Individual video clips can be extracted for analysis and reporting. The map window also can display the flight path and view cone to provide a better understanding of the video being collected. Additionally, dropping in annotations and clipmarks can be valuable in a forensic context, because reviewing collected footage at a later time may help gather further intelligence.

MVE also supports multiple real-time video feeds, which can be valuable for comparing archived video clips with recent video clips as part of a change-detection workflow. Another key component in performing change detection is the ability to create orthorectified images from video clips, provided stable telemetry is available. Orthorectification corrects problems with images and video due to camera tilt, lens distortion or terrain effects so that true distances can be measured and analyzed. Once these orthorectified images are created, they can be accurately overlaid on other geospatial data, and image-processing applications such as ERDAS IMAGINE can be used to perform change detection.

Another key to improving the usability of such aerial systems is to enhance video in real time in situations where the video may be grainy during low-light capture, obscured by clouds or smoke, or jittery due to wind buffeting the aircraft. Applying technologies such as Intergraph's Video Analyst software allows an analyst to apply state-of-the-art video filters in real time to the incoming streams, thereby improving their usability. Video Analyst includes many specialty corrections, such as dehazing, stabilization, gamma correction and brightness control.

To improve the overall value of UAS platforms, it's critical to make the collected imagery and video available to the widest variety of users. If more users can gain some utility from the video collected on a single flight, the value is increased and the cost is further justified. That's why organizations developing or acquiring UASs also should consider software solutions to ingest, store, manage, and share the collected imagery and video information. Such imagery management solutions, such as ERDAS APOLLO, can be configured to ingest data, extract and tag metadata, automatically analyze data and develop derivative products such as thumbnails of imagery or lower-resolution video.

Such geospatial data management solutions support geographic and time-based search criteria as well as searches on the related metadata. This is a critical component in an image or video comparison workflow, which also may include automated change detection. For example, an emergency response worker who recently collected imagery from a UAS after a tornado passed through a town would be able to
quickly compare that imagery to archived imagery of the same area to better assess the damage and plan search and rescue operations.

Rules and regulations for UAS use vary around the world. The Federal Aviation Administration (FAA) regulates UAS operations in the United States. Current regulations limit flights to below 400 feet, prohibit commercial use, and state all drones must be kept away from populated areas and five miles away from airports. There also are other no-fly zones, such as Washington, D.C.

Therefore, UAS flights for commercial or business purposes aren't currently allowed in the United States. However, manufacturers may apply for an experimental certificate for research and development, market surveying and crew training. UAS flights for public entities, such as federal, state and local governments and public universities, are allowed, but they require a Certificate of Waiver or Authorization from the FAA. 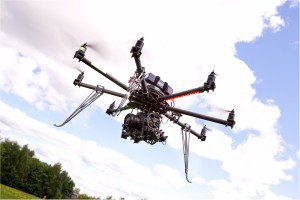 For example, it's legal for a Predator UAS to be flown by U.S. Customs and Border Protection for border patrol and California Â National Guard for wildfire surveillance. In addition, FAA recently selected six UAS research and test site operators across the country and decided to allow a government public safety agency to operate unmanned Â aircraft weighing 4.4 pounds or less while within other standard aviation regulations.

Safety and privacy concerns abound, but the benefits of widespread use are undeniable. UAS legislation in the U.S. government must move forward more rapidly to keep pace with the global community, as drones are making their way into mainstream society in many other countries.

However, it's more a matter of when, not if, UASs become an integral part of our daily lives in the United States. Most new automobile manufacturers have built collision awareness into their cars, and many are building collision avoidance systems into them as well. The same technology also will need to apply to the UAS market for large-scale mainstream usage to materialize. Obviously, this feature is critical for improving UAS safety in populated areas and preventing damage to other aircraft”manned or unmanned.