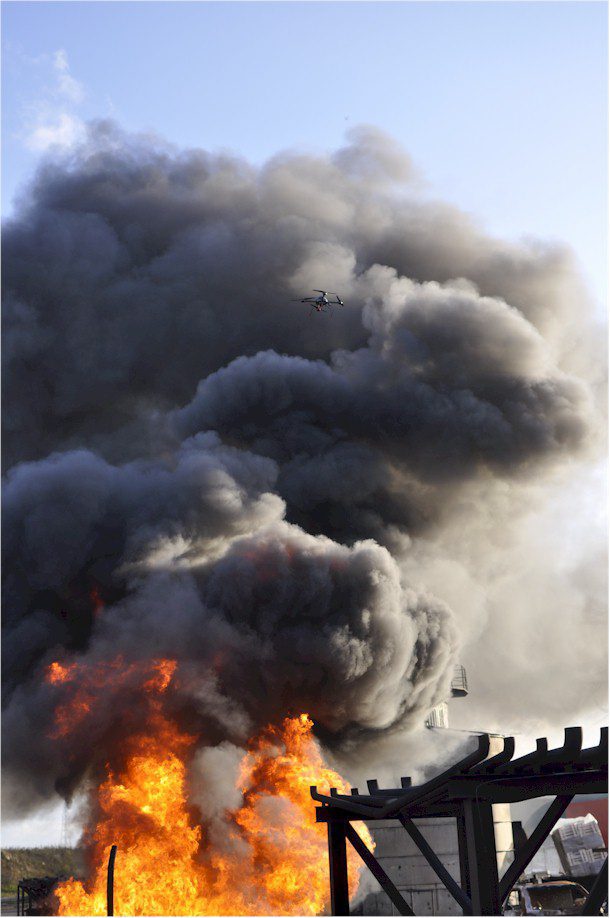 During a recent test of the AirShield system at the Rotterdam International Safety Centre in the Netherlands, researchers evaluated the chemical sensors and flight characteristics of micro unmanned aerial systems under the influence of heavy smoke and intense heat. The system allowed rescue workers to efficiently explore the pollutant cloud. 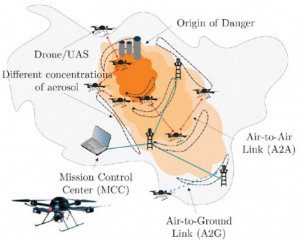 Figure 1. A deployment scenario shows how a chemical plume could be detected with an autonomous micro UAS mesh network.

Hence, the use of cognitive UASs for distributing mobile sensors in incident areas could revolutionize reconnaissance, surveillance and communication.

In the near future, police departments, fire departments and other homeland security organizations will have access to medium- and small-size UASs and integrate them in their workflow. Thus, the importance of nonmilitary frequencies and civil communication technologies will increase for safety and security missions, as the frequency pool is limited and nearly exhausted.

This also is a major concern for UAS communication. Besides flight regulations, wireless communication is an important aspect of UAS use, as telemetry information—navigation, control and guidance—and sensor data usually have to be transmitted to a mission control center (MCC) in near-real time. 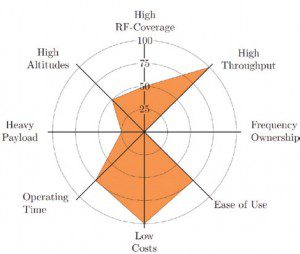 Figure 2. Civilian concepts of operations for homeland security use cover a range of UAS requirements.

Today, there’s no viable alternative for such transmission requirements besides using civil mobile communication networks. Unfortunately, there’s no foreseeable solution in terms of UAS frequency assignment. For efficient sensor coverage of large industrial and incident areas, fast and flexible strategies for collecting sensor data through autonomous, reliably connected UASs have to be developed. Viable concepts for leveraging public wireless communication networks for UAS-based cognitive remote sensing exist, but to use them effectively requires an understanding of their constraints and user requirements.

UAS Network Requirements
The requirements for using UASs in homeland security missions are different from military operations. Figure 2 offers an overview of selected requirements for civil UAS use. Homeland security organizations lack available frequencies on which UASs could operate for telemetry and payload data transmission. Additionally, costs are typically a major issue for fire and police departments. However, requirements for payload weight, operating altitudes and range are comparatively low.

In the future, instead of sending specially equipped forces into contaminated areas to clarify, contain and combat incidents caused by dangerous gases and liquids or chemical, biological, radiological and nuclear (CBRN) weapons, it will be possible to use an autonomous, wireless-connected swarm of micro UASs with lightweight mobile sensor systems. Using such a swarm allows emergency responders to calculate gas concentrations and generate propagation forecasts at an early stage to avert danger.

Chemical plumes can spread 20 kilometers or more. Hence, coverage is a major concern that can be addressed by using several UASs in a swarm, assigning a relay functionality to each UAS or by using public wireless networks. Relevant incident areas are usually urban or metropolitan areas where infrastructures of cellular networks are available, such as GSM, UMTS/HSPA, LTE and WiMAX.

Figure 3 depicts a CBRN-detection workflow for a fire department that involves three management levels, each with different alert stages when a response is initiated. Different management levels have fundamentally different information demands, resulting in a complex UAS architecture.

Cellular Air-to-Ground Links
Installing air-to-ground links on available public cellular networks has several advantages, including high coverage, available frequencies, minimal effort and cost, and existing interfaces to other networks (e.g., IP). For CBRN detection, throughput requirements are low, which is why the performance of public networks for payload data transmission is sufficient if no images or videos need to be transmitted. 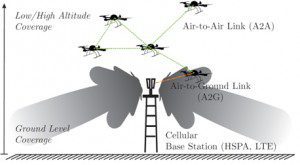 Such constraints can be overcome by introducing efficient fail-safe and redundancy mechanisms. Areas with no reception can be compensated for by using air-to-air (A2A) links on the first backup level. Combined with agent-based autonomy on the second backup level, public wireless networks become a feasible communication technology for UASs. If all public networks are down because of a disaster or other catastrophe, WLAN in infrastructure mode or ad-hoc Mobile WiMAX base stations offer promising solutions for rescue organizations at the third backup level. Unfortunately, they raise higher requirements for the A2A links to optimize the coverage for a region of interest.

Solving the hidden station problem by introducing the RTS/CTS protocol has to be paid with a higher overhead. The overhead for required routing protocols like AODV, OLSR or deduced hybrids of these protocols reduces the total possible throughput in a mesh network. However, an aerial mesh network established with A2A links offers several advantages.

The tradeoff between coverage and throughput is acceptable if there are low throughput requirements, which is the case for CBRN reconnaissance, where only telemetry and payload data (sensor information) have to be transmitted. The aerial mesh network allows UASs to cover a large area and calculate a local gas concentration gradient (Figure 1). Although not all micro UAVs may have a connection to the base station on their own—loss of air-to-ground (A2G) link—additional A2A links can be used for routing data to a neighbor relay micro UAS, which works as a gateway to a ground station.

Military organizations have to cope with jamming transmitters, which usually prohibit the use of off-the-shelf wireless technologies. This restriction plays a minor part in homeland security operations. Hence, for the implementation of A2A links, different communication technologies and frequencies are available.

ZigBee comes with good meshing capabilities but suffers from low coverage. Routing protocols for WLAN, such as OLSR, are available for embedded and low-weight devices that easily can be mounted to micro UASs. WLAN frequency bands are available at 2.4 GHz (EU, USA), 5.2 GHz (EU, USA), 5.5 GHz (EU) and 5.7 GHz (USA). Because frequencies at 2.4 GHz are popular in the private sector, these frequency bands are usually overloaded and have high round-trip times because of higher back-off intervals caused by the CSMA MAC protocol.

The WLAN interference situation is better at 5 GHz; the signal degradation for low transmission powers is high because of the attenuation caused by matter, particularly in indoor environments. That’s why 5 GHz is rarely used for indoor applications. Furthermore, interference is negligible at higher altitudes. For aerial deployment above 100 meters, attenuation can be contained to free space attenuation. Besides, allowed transmit powers in this frequency band are higher (up to 1 W), so the possible coverage region can be larger. Thus, there’s no reason not to use 5 GHz for A2A links.

Future Work
Using public wireless communication infrastructures for UAS-based sensor networks is a feasible approach for homeland security applications under certain circumstances. Several advantages, such as high coverage, existing infrastructures and frequencies, can be combined with different fail-safe and redundancy approaches to overcome delay and reliability constraints. In particular, communication awareness and autonomous UASs are able to improve the rescue workflow with minor expenses.

Editor’s Note: This article is an adapted excerpt from a paper titled “Using Public Network Infrastructure for UAV Remote Sensing in Civilian Security Operations,” which appeared in Homeland Security Affairs.