In June 2016, GHGSat Inc. of Montreal launched a microsatellite called Claire on an ambitious demonstration mission to prove that greenhouse gas emissions from point sources on the ground could be monitored from space. Claire was a resounding success, and the Canadian company announced plans less than a year later to build two commercial microsatellites based on the same design as the demonstration mission. 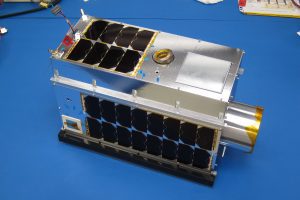 The GHGSat business model is unique. The owners and operators of power plants, industrial sites and other emitters of greenhouse gasses contract the company to periodically monitor their facilities from space. The primary sensor on the Claire microsatellite is a miniaturized hyperspectral SWIR imaging spectrometer that targets the client facility's location and measures its emission of specific gasses.

Our clients want to better understand, control and reduce their emissions, said GHGSat Inc. CEO Stephane Germain, explaining the typical product delivered to the customer is a report detailing emission measurements made by the satellite.

A key challenge for the mission was developing a cost-effective microsatellite platform with sufficient attitude control and stability to point the onboard sensor accurately at a known location on the ground long enough to capture a useful reading. GHGSat calculated the pointing accuracy had to be within 2.6 kilometers of the facility center point and remain on target for 20 seconds, which meant the satellite would have to pan, or swivel, in orbit as it passed over the area of interest.

Claire exceeded both of these specifications, said Germain.

At first glance, accurate satellite pointing may not seem like a major accomplishment until the size of the GHGSat platform is considered: The Claire bus measures 20x30x40 centimeters and weighs only 15 kilograms, putting it at the lower end of the microsatellite class. During the planning of the proof-of-concept mission, GHGSat was aware that very few satellites in the small, micro and nano classes had demonstrated the level of attitude control required for this type of application. However, a smaller satellite was required to meet the budget constraints of the business model. 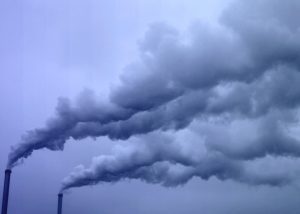 Claire's mission is to monitor greenhouse gas emissions from point sources on the ground. Gases absorb light at specific wavelengths, creating a spectral fingerprint for each gas. Claire finds those fingerprints using sunlight, and measures the brightness of those fingerprints to determine how much of each gas is present in the field of view of the satellite. Claire measures two gas fingerprints: carbon dioxide and methane”the two most-significant greenhouse gases.

The Montreal firm ultimately didn't have to look far to find the performance capabilities it sought. Space Flight Laboratory (SFL) at the University of Toronto Institute for Aerospace Studies had been focused on developing technologies to address attitude control issues for smaller satellites since its inception in 1998 and had already completed multiple successful missions requiring accurate pointing.

SFL submitted a proposal based on specifications outlined by GHGSat and won the Claire development contract. The Toronto organization built the microsatellite, originally named GHGSat-D, on its Next-generation Earth Monitoring and Observation (NEMO) platform. Development was completed in just two years, and Claire launched from India in mid-2016.

The ability to point and do so accurately is essential in a satellite built for applications that involve looking at or measuring something on the ground or out in space, explained SFL's director, Dr. Robert E. Zee. When his organization opened its doors almost 20 years ago, there had been very little pointing and attitude control technology developed for smaller satellites.

At that time, micro- and nano-satellites were thought of as toys tumbling in space, and you couldn't do anything serious with them, said Zee. Advanced attitude control opens the door for smaller satellites to perform complex missions that are also extremely cost effective. 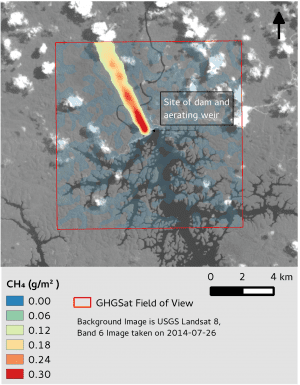 This image from Claire (GHGSat-D) shows concentrations of methane (CH4) in a plume carried downwind from an aerating weir at a hydroelectric dam. Industrial site operators can use Claire's measurements to better understand their greenhouse gas emissions, enabling them to control and ultimately reduce them. For example, Claire can help coal mine and landfill operators find significant leaks of methane and then measure those leaks to justify a business case for gas-fired electricity generation.

Zee and his Toronto team had set their sights on developing or modifying technologies that would enable smaller satellites to do everything the bigger, more-expensive ones could. SFL proceeded to bid on and win contracts for nearly every type of application traditional-size satellites are used“Earth observation, space astronomy and scientific research“many of which require advanced attitude control for pointing.

Earth observation is one of the most common application areas where stable satellite pointing is so important. Some remote-sensing platforms must keep their sensors pointed directly down at the Earth to capture nadir imagery of ground features as the satellites pass overhead. A more-complex variation of this has the satellite swiveling, or panning, from side to side to collect off-nadir imagery of the surface at an oblique angle.

Among the most complicated of these missions is ground target tracking, which is the technique required by GHGSat, said Zee. The satellite points its sensor at a specific feature or spot on the ground, and the satellite slews to stay pointed at the object for a period of time as it passes overhead.

While not the case with GHGSat, ground target tracking can also involve pointing at moving objects n the Earth's surface, which adds another level of difficulty, he added.

The pointing direction isn't always toward Earth. A 2003 SFL co-developed microsat mission called the Microvariability and Oscillations of STars (MOST) was a space telescope designed to observe stars thousands of light years away in outer space. Funded by the Canadian Space Agency, MOST was among the first in the world to attempt stringent pointing from a microsatellite. 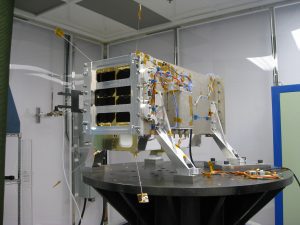 A satellite's pointing proficiency is usually defined in terms of accuracy and stability. Accuracy is quantified in degrees indicating how far off from the intended target the pointing is measured. Stability refers to how well the satellite maintains that pointing accuracy, quantified as a standard deviation from the accuracy. One application, for example, might require 1 degree of accuracy with a stability of 0.1 degree in one standard deviation.

Pointing its space telescope out at the stars, for example, MOST required a stability of less than 0.007 degrees. In 2014, SFL completed a series of launches to bring to orbit another space astronomy mission with stringent pointing requirements: a constellation of five 7-kilogram nanosatellites for a still-active mission called BRITE-Constellation (BRIght Target Explorer Constellation).

Right now, we can do even more-demanding missions than MOST or BRITE, said Zee.

More recently, SFL has focused on developing constellations of geolocation satellites capable of autonomously maintaining on-orbit formations, which requires the individual platforms to point at each other and share telemetry data and at the Earth to map radio frequency signals. 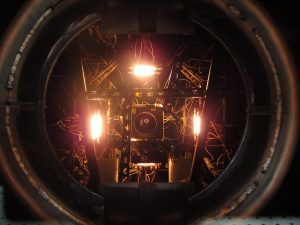 It's important to keep in mind there are different types of satellite pointing, and their relative difficulty varies with the end-use application, said Zee. One small satellite attitude control technology is not necessarily a solution for all applications.

Attitude control and pointing stability are more challenging with smaller satellites than larger ones due to the difference in masses (inertia) of the platforms. In the same way a large airliner is more stable than a small airplane in high winds, the greater mass of a traditional-size satellite enables it to better withstand the forces acting upon it in orbit.

Smaller boxes tend to be more easily rotated in orbit and are more difficult to stabilize because they don't have as much inertia, said Zee. Rotational disturbances or torques caused by the Earth's atmosphere, its magnetic field and solar radiation impact the attitude of a spacecraft in orbit.

Large satellites utilize a combination of sensors and actuators controlled by onboard algorithms to stabilize the platform and achieve the desired pointing accuracy. With the goal of attaining the same performance in smaller satellites, SFL began developing miniaturized and more precise sensor and actuator hardware and writing its own advanced algorithms to meet the exacting control requirements of the less massive nano-, micro- and small-satellite buses. 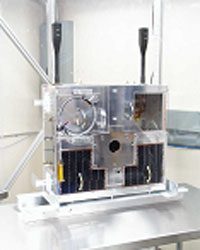 SFL co-developed a microsat mission called the Microvariability and Oscillations of STars (MOST), a space telescope designed to observe stars thousands of light years away. Funded by the Canadian Space Agency, MOST was among the first in the world to attempt stringent pointing from a microsatellite.

In many missions, SFL uses two types of small actuator to change the attitude of the spacecraft in orbit. The first was co-developed by SFL, and these are small reaction wheels mounted on tiny motors. By spinning up or down, they create torque to rotate the satellite. Multiple reaction wheels set at angles to each other induce finely controlled rotations along several axes. Ranging in mass and varying from a few to tens of centimeters in diameter, depending on the size of the satellite in which they are used, the reaction wheels used by SFL are sold commercially and widely used in the microspace community.

The second type of actuator is a custom, scalable magnetorquer, or solenoid, which is an electromagnet that imparts a spin on the satellite by working against the Earth's magnetic field. Magnetorquers are often also used to dump, or remove, the momentum stored in reaction wheels to avoid the saturation that occurs when the wheels reach maximum speed.

While these actuators rotate and swivel the spacecraft, onboard sensors constantly measure the spacecraft's orientation. SFL uses precise sensors to determine the attitude of its platforms relative to star maps, the sun or Earth's magnetic field. A star tracker, for example, helps the satellite find its proper orientation by comparing its view of stars in space against a star map stored in onboard computer memory.

In 2014, SFL completed a series of launches to bring to orbit another space astronomy mission with stringent pointing requirements: a constellation of five 7-kilogram nanosatellites for a still-active mission called BRITE-Constellation (BRIght Target Explorer Constellation).

There is no one-size-fits-all solution for hardware in attitude control. We devise a combination of actuators and sensors that meet the particular pointing and stability requirements of a given mission, said Zee.

The most critical component of attitude control, however, is the software that finely coordinates the movements of the actuators and responses of the sensors to point the satellite in the right direction. SFL developed its control algorithms from scratch, and has continued to fine tune them over two decades. Each new mission has unique challenges and requires customization of the software.

One of the keys to SFL's success, according to Zee, is a proprietary high-fidelity simulation software his team wrote to custom-design each mission. By simulating how a proposed platform must perform in space to meet the needs of a given application, SFL selects the right combination of actuators and sensors and software modifications to achieve the desired pointing and stability results.

When GHGSat Inc. began looking for a microspace developer to build its 2016 demonstration mission, SFL stood out from the crowd. The 2.6-kilometer ground accuracy required by the greenhouse-gas-monitoring application translated into 0.3 degrees ground target tracking accuracy from an altitude of 500 kilometers.

SFL gave us the confidence they could achieve the results [we wanted], and they delivered, said GHGSat's Germain.

In 2017, the Montreal firm awarded the development planning contract for its two commercial microsatellites to SFL. GHGSat-C1 and -C2 are expected to be launched over the next two years.

We have 20 years of experience with nano- and micro-satellite attitude control, said Zee. Based on what we've seen, our flight-proven performance is very rarely matched by anyone else out there at similarly low cost.

Kevin Corbley is a consultant in the Geospatial and Aerospace industries. He may be reached at www.corbleycommunications.com.