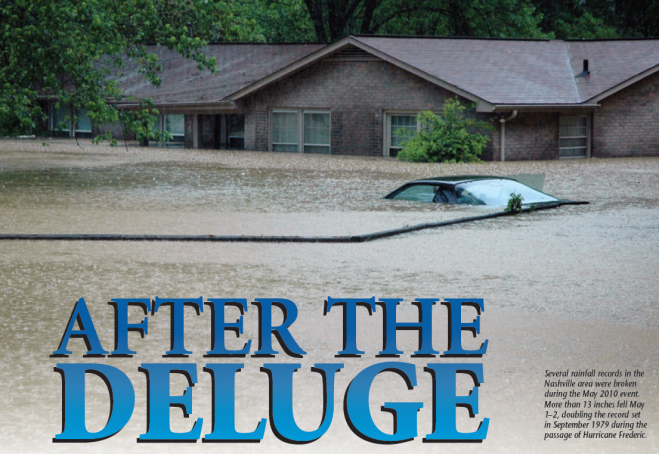 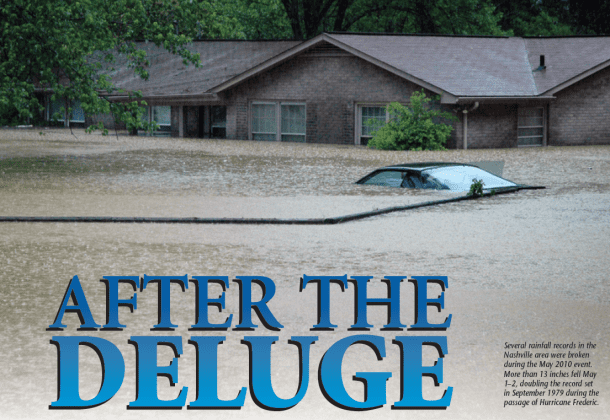 On more than two days in May 2010, the city of Nashville and much of western Tennessee was pounded by 17 inches of rain—more than twice the rainfall ever recorded for a similar period in that area. Designated a 1,000-year event by the National Weather Service, the storm unleashed epic flooding in nearly all the rivers and streams in downtown Nashville and surrounding Davidson County. The raging floodwaters left 11 residents dead and inflicted $2 billion in property damage.

Aerial imagery revealed the extent of the Cumberland River’s flooding in Nashville and surrounding areas.

Even before the downpours ceased, the Nashville Metropolitan Planning Department initiated multiple activities to support emergency response agencies in the immediate aftermath of the storm and to manage the long clean-up process that would follow. One planned activity was to map the impacted area as quickly as possible. To facilitate this effort, the department already had contracted with Kucera International for emergency mapping support.

On Sunday, May 2, the second day of rain, Planning Department personnel were on the phone with Kucera headquarters in Cleveland to plan aerial acquisitions. After careful consideration within the department, the decision was made to coincide the image collection with anticipated cresting of the Cumberland River in Nashville the following day, thereby maximizing the immediate and long-term usefulness of the orthophotography.

Fortunately, the aerial mapping firm had previous experience acquiring imagery over Nashville and severely flooded areas. With several mapping sensors in the company’s hangar, Kucera President John Antalovich, Jr., knew he had to mobilize the system that could capture undistorted images of the flooded streets in downtown Nashville and turn the processed imagery around in time for the department to use as planned.

By the next morning, the aircraft was in flight over Nashville, dodging the remaining storm clouds as it acquired high-resolution imagery of Davidson County just as the Cumberland River peaked at a record-breaking 12 feet above flood stage. By Tuesday, the first orthorectified images were being delivered from the processing center in Cleveland to the planners in Nashville.

“Several organizations had aircraft in the air those first few days, but we were the only ones with imagery received in the first few days after the event,” says Jennifer Higgs, geographic information system (GIS) director in the Nashville Metropolitan Planning Department.

As a result, the Planning Department was able to share its maps with multiple state and federal agencies, including the U.S. Army Corps of Engineers, Federal Emergency Management Agency (FEMA), U.S. Geological Survey (USGS) and National Weather Service.

While the torrential rains came unexpectedly, the mapping effort already was part of the department’s carefully scripted emergency response plan. The city and county had contracted Kucera to collect orthoimagery and light detection and ranging (LiDAR) data before, so they were well aware of the many roles highly accurate maps could play in an emergency, especially if acquired quickly. 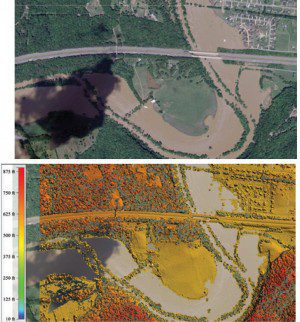 A vertical overview shows the same area with and without an auto-correlated digital surface model.

“When you have something happening over an entire county, it’s hard to get a perspective of what’s occurring in remote areas,” explains Higgs. “For life-saving purposes, we needed to be able to see into those areas … and the fire department had to make sure its people were searching the full extent of the flooded area.”

The department’s plan was to provide the emergency first responders with high-water image maps so they could determine which parts of the county had been hardest hit by the floodwaters. Rescue personnel could be deployed according to priorities identified in the maps. And given the topography of the land, officials knew there would be pockets of high ground cut off by the floods. High-resolution imagery was considered the only way to quickly find those areas and determine how rescue workers could best reach them.

“The second reason [for mapping the flood quickly] is historic,” says Higgs. “We wanted to catch the water at its crest so we could do future planning based on where the water was.”

On Monday morning, May 3, a Piper Navajo Chieftain arrived in Nashville and acquired imagery over the entire county. With intermittent rainclouds still in the area, the pilots navigated the aircraft in north-south flight lines across the county from west to east as best they could to coincide collections with the cresting Cumberland River as the high water moved toward Nashville. Acquisition across the 1,360-square-kilometer county took about two hours at an altitude of 10,000 feet.

After completing the mission, the aircraft returned to Ohio where Kucera maintains its processing facility. Raw data were downloaded from the sensor and the internal Global Positioning System/Inertial Measurement Unit (GPS/IMU) to Leica Geosystems’ image processing software for orthorectification and georeferencing. Technicians worked through the night to deliver orthorectified images to Nashville the next day, Tuesday, less than 24 hours after the floodwaters reached their peak.

“In most situations where we’ve worked disaster response, we send the imagery piecemeal in individual orthorectified strips to get the client started rather than wait for the entire mosaic,” explains Antalovich.

Says Higgs, “By Tuesday, the data were streaming in. [The imagery] wasn’t mosaicked, but we had what we needed, and we immediately started printing maps for the fire department.”

As requested, the first orthorectified flight lines to arrive were those covering the western part of the county, which had been hardest hit and still had people reported missing. Maps generated from the orthoimagery were in great demand by the emergency responders because they were the first delivered to the stricken area. The entire countywide orthomosaic was delivered in three days. Resolution for the finished products was one foot ground sample distance (GSD) at National Map accuracy of 1” = 200’ (1:2,400-scale).

As the floodwaters began to subside, deployment of resources turned from search and rescue to clean up and recovery. Orthoimagery applications went through the same transition.

A major task for the department was cooperating with the county in assembling the details needed to apply for federal disaster assistance. This project, along with other ongoing recovery activities, required extremely accurate high-water mark delineation, water-depth assessments and damaged building counts. Participants were extracting inundation lines from the imagery by hand, and they wanted faster and more accurate information for terrain hidden under clouds and below the tree canopies in forested areas.

Knowing that LiDAR acquisition hadn’t been included in the flood mapping request, Planning Department personnel asked Kucera if a water surface model could be generated quickly from the imagery. Fortunately, the request came to Dan DeBiase, the firm’s imagery processing manager, who recently had been testing a new autocorrelation process. With the help of archived LiDAR data for the area, DeBiase devised a plan to create a bare-Earth surface model from the flooded data.

To function accurately, the auto-correlation process requires three views of surface features. For most of the flooded area, three views had been acquired. Kucera’s LeicaADS40/SH51 sensors capture fore and aft stereo as part of normal operations, and standard side overlap of flight lines provided the third perspective. From there, it was simply a matter of running the data through the correlation software and thinking outside the box.

“[The software] gives you a return based on the reliability of the match among all three stereo views,” says
DeBiase. “But there was no match at all where there was water inundation.”

He explained the software couldn’t find surface matches in the inundated
areas because the floodwaters were moving too fast for the system to make reliable estimations.

“We actually got returns on everything except for the moving flood waters,” says DeBiase. “This worked to our advantage because it was easy to identify the flooding [as those areas without returns].”

The correlation process was 95 percent automated, requiring minor editing and filtering to remove bad points and anomalies. Kucera was able to deliver the floodwater surface model for downtown Nashville a few days after the orthomosaicking was completed. Data for the entire county, including wooded areas, were delivered within two weeks. The Planning Department compared the surface model against an existing LiDAR-generated elevation model to extract water-depth measurements.

“Mostly for us, we used the data for life safety—making sure we hadn’t missed areas that [public safety] needed to get into,” says Higgs. “And for cleanup, we had to make sure Public Works went into those areas to collect the garbage and [debris].”

Today, more than a year after the historic flooding in Nashville and Davidson County, the imagery collected the day after the storms still is being used. Likely the most high-profile projects involve the city, county and federal agencies. FEMA is using the high-water maps to re-draw flood plain boundaries along all of the major waterways in the area. Already, these maps are influencing building permits and flood insurance policies.

The Planning Department is participating in advanced computer modeling with the Army Corps, USGS and National Weather Service. The Corps has used the inundation data to update its flood simulation models for drainage basins and unmanaged tributaries in the region. Flood levels are being cross-referenced with USGS stream gauge data recorded during the 2010 storm. This information will give the Weather Service a more accurate ability to predict flood severity based on rainfall recordings at the stream gauges.