September 15, 2014
Aerial Imaging Primer: Moving Beyond the Base Map 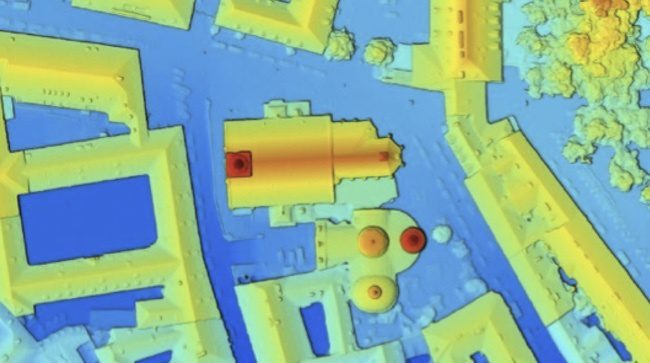 Aerial imaging advances have created an era of higher spatial resolution and greater sensor options for a variety of applications.

Aircraft have several advantages over satellite platforms when collecting imagery. For example, aircraft can collect data on specific dates and times. Another advantage is the ability to put new sensors in aircraft as technology advances. Advanced technology is leading to more compact digital imaging systems with high-resolution sensors. Many imaging systems are so well integrated there are only a few essential cables connected to a box that houses multiple computing units and sensor heads.

For decades, film-based aerial photography was the dominant remote sensing technology. Your choices were panchromatic, color or color-infrared film. However, you could usually only choose one type of film on any given flight because film is limited to three emulsion layers.

When digital imaging cameras emerged 20 years ago, they were relatively low-resolution systems that typically required multiple boxes strung together by an “organized” spaghetti-like mess of wires and cables. It seemed improbable that digital imaging technology would be a viable alternative to film cameras.

Now film manufacturing has decreased to the point where certain film products no longer are produced. Conversely, today’s digital imaging systems have advanced beyond film for photogrammetric applications, and digital technology has bred innovative, evolving applications.

For example, using a single digital camera housing that fits in the same camera port as a traditional film-based system, an aircraft can collect 4-band imagery (blue, green, red and near-infrared). As a result, a vast amount of data can be collected with each flight. 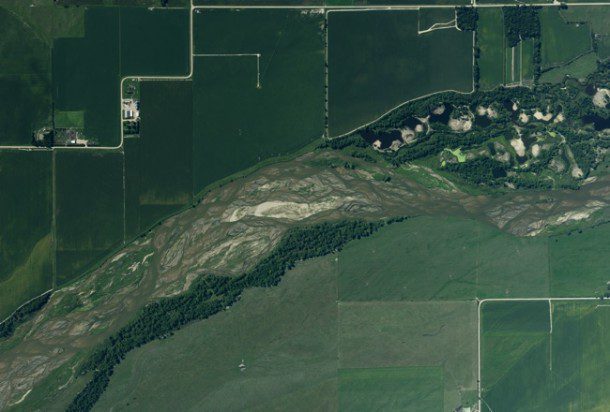 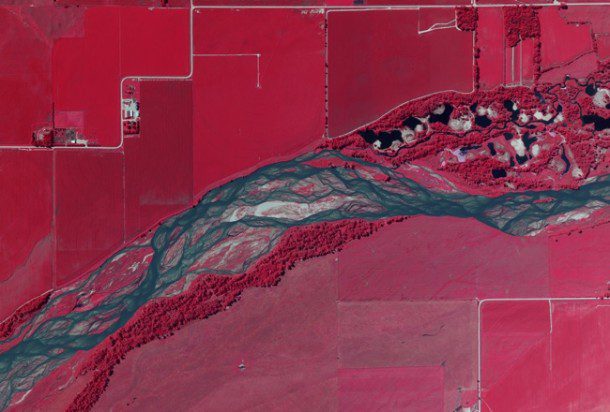 The switch from film- to digital-based aerial imaging systems occurred during the first decade of the 21st century. A distinct advantage of a digital collection system is its ability to collect color (top) and near-infrared (bottom) imagery in a single pass over a project area, allowing a vast amount of data to be collected with each flight.

Today’s digital cameras also are compact and can be placed in various orientations. Some aerial imaging systems are designed to have a camera pointed in each cardinal direction, plus nadir, to support orthophotography and oblique angles. Now users can view the sides of buildings, measure building heights and the slope of rooftops, create 3-D models and develop numerous other applications.

Compared with film cameras, digital cameras allow aerial mapping companies to acquire images with higher resolution and improved color fidelity at a lower cost. Film cameras have a built-in workflow cost associated with each exposure, including the cost of film, film development, and scanning to generate a digital image. Digital images generated from film are limited by film speed and the corresponding shutter speed, which affect image quality.

Moreover, usually film is scanned at 8 bits per pixel, which limits the number of shades to 256 per color channel. Digital cameras can collect 12-bit imagery or better and provide at least 4,096 shades per color channel. This high degree of spectral resolution allows users to optimize the imagery for viewing dark areas like shadows and bright areas like snow or rooftops.

New technology also has driven advances in sensor design. Most aerial imagery is collected using broad bands such as blue, green, red, etc., which is how film is designed to work. Now hyperspectral imaging systems are available that separate the energy spectrum into hundreds of smaller bands that can be used to detect objects or materials on the ground with a specific signature. Significant advances in mineral mining and vegetation mapping have been made with hyperspectral imaging.

A technology that has trickled down from the military is the ability to see in the dark—not light-enhancing technology, but rather the ability to detect heat signatures. Thermal sensors have been used on weather satellites for years, but the size, weight and low resolution of such sensors historically prohibited their use in aircraft. Now compact thermal sensors that offer good imaging resolution are available.

Thermal sensors measure energy we can’t see, but we feel it. All objects, hot and cold, radiate energy that can be measured in an imaging system with the accuracy of a thermometer. This allows users to visualize an object’s thermal signature to detect heat loss, spot animals or assess water stress in plants, among other applications. 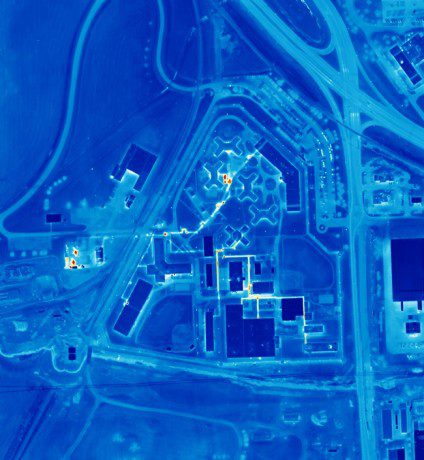 Light detection and ranging (LiDAR) is a digital technology that uses lasers to map terrain. By coupling LiDAR technology with an airborne Global Positioning System receiver and an inertial measurement unit, users can generate high-accuracy terrain and object maps using millions of data points. LiDAR also can be used to map terrain under tree canopies if the tree density isn’t too thick and penetrate shallow water for shoreline mapping.

In addition, advances in software design, computing capacity and digital camera acquisition capabilities have opened new possibilities in digital surface modeling (DSM). A typical film-based camera may have a flight plan designed with 30 percent sidelap and 60 percent forwardlap.  Now terrain mapping can be accomplished with 60 percent sidelap and forwardlap, thereby providing nine images that overlap for any given point. Forwardlap can be increased up to 90 percent to generate ultra-dense DSMs that can be used to create 3-D models with excellent detail and feature detection. Ultra-dense DSMs exceed the detail that can be collected feasibly using an aircraft-mounted LiDAR system.

Such advances have made sensor fusion more common, especially for corridor projects such as power line inspection and mapping. Sensor fusion integrates multiple types of sensors and cameras on a single platform through compact sensor design and innovative integration. Today it’s common to collect LiDAR data of powerlines to measure line sag. It’s also possible to co-mount a camera in a nadir position for mapping and a forward-looking camera for inspecting transformers and insulators on top of power poles. This creates a cost-effective method to acquire multiple datasets for sensor fusion analysis.

Thermal cameras also can be mounted with LiDAR sensors to help detect wire problems. For example, heat is produced when there’s stress in a wire, loose connections, or failing components. The human eye can’t see the heat, but a thermal camera can. The inspection process becomes much more efficient when a thermal image is combined with LiDAR data and color cameras. 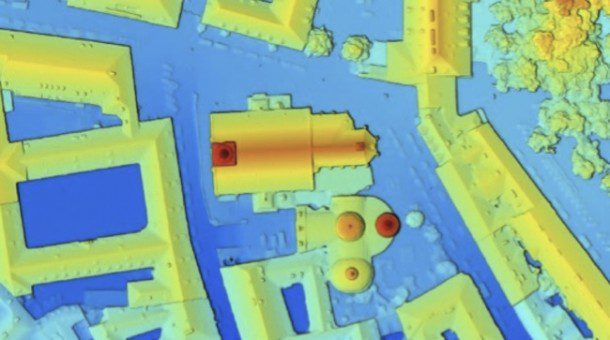 Technology is pushing aerial imagery into an era of higher spatial resolution. Instead of a service provider asking clients about their spatial resolution requirements, clients often ask service providers about the latest technology capabilities. Rapid data throughput enables engineering design projects to be flown at 5-centimeter spatial resolution, whereas high-value mapping imagery may be acquired at 7.5 centimeters and urban areas are flown at 15 centimeters. Moreover, integrated data sets generated from sensor fusion, 3-D modeling and oblique imaging offer a level of data interaction that couldn’t be imagined a few years ago.