LEUVEN, Belgium, 22 January 2019 – Virtual Surveyor drone surveying and mapping software has added new functionality that enables users to process larger projects without buying more powerful computers or expensive cloud services. The enhancement is among several included in Virtual Surveyor 6.2 released this week in response to requests from an international client base that doubled in 2018.

“Our objective with Version 6.2 is to make our users more productive while saving them money by eliminating the need to invest in new hardware or processing services,” said Tom Op ‘t Eyndt, CEO of Virtual Surveyor nv in Belgium. “We have addressed the fact that drones are capturing more data at higher resolution, resulting in enormous files sizes.” 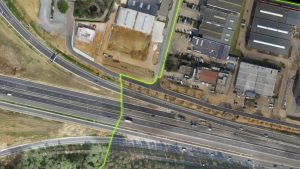 A mosaic of two orthophotos with the applied cutline displayed.

Virtual Surveyor 6.2 solves the problem of large files by offering enhanced Clipping and Mosaicking functionality. Users can now merge multiple smaller processed chunks of orthophotos and digital surface models (DSM) into a single project and create smooth edges between these pieces with the new clipping tool. This seamless mosaic can be exported to a new tiff file or serve as the basis for a full area virtual survey.

“The clipping and mosaicking can be performed very quickly, saving hours of manual work,” said Op ‘t Eyndt. “All Virtual Surveyor users will benefit from this new feature, which will appeal to transportation and utility corridor mapping in particular.”

Virtual Surveyor 6.2 also offers a 3D Fly Through capability. Users can select spatial book marks and way points in their scene and create a movie that allows the viewer to fly through the terrain in three dimensions. This interactive functionality is used most often by drone operators and survey firms to generate capability demonstrations when pitching their services to prospective clients.

Another workflow enhancement in Version 6.2 is Improved Surface Handling for Volume Calculations. Developed primarily for users who measure volumetrics of material piles in drone survey data, this streamlined capability makes it easy to represent topographies as triangles, contour lines or outlines without creating three different objects. Virtual Surveyor users have better control of how they present volume measurements.

Virtual Surveyor users will find several other new or enhanced capabilities in Version 6.2:

“The advantage of Virtual Surveyor is that it combines the interpretation skill of a professional surveyor with computing power to create standard survey products,” said Op ‘t Eyndt. “Surveyors can now accomplish more in Version 6.2 without expensive upgrades to other aspects of their workflow.”

Current subscribers to Virtual Surveyor will see their software being updated automatically.