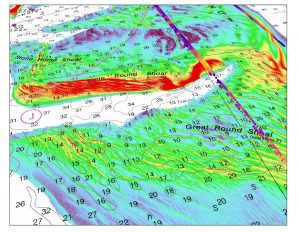 TCarta was the subcontractor on the prime contract awarded to Woolpert, an international geospatial firm headquartered in Dayton, Ohio.

The NOAA pilot focused on two shallow-water regions that were 3,000 square kilometers in total area - one in the Green Bay area of western Lake Michigan and the other around Cape Cod and Nantucket Sound. Both areas experience natural forces that alter the underwater terrain faster than traditional bathymetric surveys can be completed.

SDB is being considered as a fast and inexpensive alternative for such coastal zones. A primary advantage of SDB is that orbiting satellites can be tasked to collect up-to-date imagery, with bathymetric measurements derived to create end products in a matter of days.

TCarta created products in the two project pilot areas to enable NOAA to test the use of SDB in shallow coastal zones. This provided updated bathymetry and infilled data gaps from traditional bathymetric measurement technologies, such as airborne lidar or marine sonar. The pilot was conducted jointly by NOAA’s Office of Coast Survey and National Geodetic Survey’s Remote Sensing Division. The SDB data sets measured the seafloor to a depth of 20-25 meters, with validation using ICESat-2.

"The integration of ICESat2 bathymetry with satellite imagery derived bathymetry is a powerful combination to increase accuracy," said RDML Shepard Smith, the recently retired Director of NOAA's Office of Coast Survey. "It holds the potential to dramatically improve our ability to monitor change in dynamic coastal waters and allow us to map remote areas for the first time."