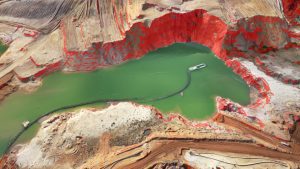 With the click of a button, operators of sand pits and quarries can see precisely where the escarpments surrounding their excavations have exceeded user-specified slope angles, said Tom Op ˜t Eyndt, CEO of Virtual Surveyor nv in Belgium. This enables the managers of sand pit dredging operations, for example, to remediate the situation before the slope collapses and hurts workers.

Addition of the Slope Threshold lens in Version 7.2 complements the lens technology Virtual Surveyor introduced in 2019 to enhance and colorize different aspects of terrain to give users a better understanding of topography. The first six lenses were Hill Shade, Contours, Transparent, Slope Direction, Slope Steepness, and Elevation. These lens tools have been further refined with the ability to stretch the color gradients, improving the 3D visualization of slopes, elevations and contours.

Virtual Surveyor Version 7.2 also builds on advancements in recent releases that have focused on making volumetric and cut-and-fill calculation faster and more accurate in quarries, mine pits, retention ponds, and other basins that fill with water. The Extract Level and Create Water functions delineate a water feature with a single click where the water meets the edge of a basin, pond or quarry. This removes noise from the data and creates a perfectly flat elevation for the water surface in the generated surface model.

We have further enhanced this water extraction process by adding a new tool called MultiVertex editing, said Op ˜t Eyndt. Rather than click on dozens of points to delineate terrain bulges and jetties that extend into the water body and distort the perimeter, the MultiVertex tool lets the user click just once to delete the extraneous points.

Another enhancement is a new 2D view mode. The original strength of Virtual Surveyor is the ability to work in 3D. In a 3D view, however, survey lines and points can be obscured by the topography for users that overlay multiple drone surveys taken at different dates.

Virtual Surveyor users can now toggle back and forth between 3D and 2D when they need to see a geometrically correct view of multiple historical DSM vectors overlaid on the orthophoto, said Op ˜t Eyndt.

The latest features in Virtual Surveyor 7.2 and their applications in a Sand Pit Dredging operation are demonstrated in this video: https://youtu.be/BqZcD5CTcks

Current subscribers to Virtual Surveyor will see their software being updated to Version 7.2 automatically. To start a free 14-day trial of Virtual Surveyor, visit www.virtual-surveyor.com.