Somerville, AL “ February 2017.Â As a new decade breaks upon us, LIDARUSA is pleased to announce that the Optech CL-360 has joined the ranks of our LIDARUSA Snoopy systems. The Snoopy CL-360 has been meticulously designed for integration on backpack, vehicle, and UAV applications. Weighing in at 5kg fully assembled the Snoopy CL-360 is capable of delivering amazing results in accuracy, up toÂ  +/-0.01 ft on paved surfaces from a vehicle. The system also boasts a scan line rate of 250Hz with a 500kHz data rate giving a very uniform result along and across track.Â The systems are easily configurable with multiple scanners (similar to IoT) to avoid occlusions. 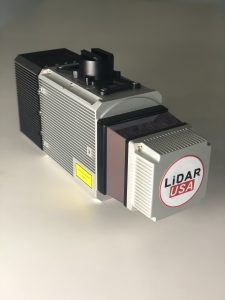 We are pleased to again partner with LidarUSA in their innovative approach to UAV integration with the addition of our CL-360 to their product portfolio.Â  Featuring true 360 degree scanning without blind spots, CL-360 integrated by LidarUSA will provide an exciting addition to the UAV marketplace,Â said Optech Executive Vice President and General Manager Michel Stanier.

Users can also benefit from a UAV deployment, achieving scans with usable data as much as 60 degrees off nadir (widths of over 1100 ft while scanningÂ at the 400 ft ceiling). The small beam size of 0.3mrad allows the CL-series to more reliably collect ground points (i.e. on or near the dirt through vegetation) compared to other similarly priced systems while also providing better detection of fine linear features such as power lines and rail-road tracks.

The world-class engineering from an established leader (Optech), integrated into the Snoopy series of systems from LIDARUSA, will undoubtedly bring about a significant change in the mapping community in 2020. Users can expect to see the benefit of decreased field collection effort and increased product quality resulting in a growing and profitable business.Â

“As more technologies embrace lidar collection to reduce their field time, we expect to see the CL-series become the ‘go to’ solution for many of them,” says Jeff Fagerman of LIDARUSA. “The CL-series provides the accuracy and point density often necessary to meet the client’s every growing demands for more, more, more. By designing the system for car and UAV, as well as multiple configurations (2 or more systems running together), our users will greatly benefit where they feel it most – the bank.”

LiDARUSA, also known as Fagerman Technologies, is a family owned business just outside of Huntsville, AL. LiDARUSA specializes in laser scanning, photogrammetry, instrumentation and all things geomatics. Years of experience working on best-in-class products have developed our sense of quality and leadership necessary to build only the best systems.