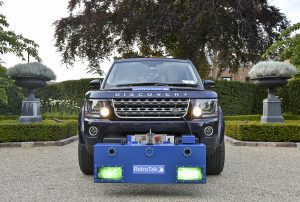 “The RetroTek-D is a game-changer for the pavement striping maintenance and survey industry on so many levels and is a natural development of our RetroTek-MU retroreflectometer”, said Joe Turley, Chief Executive of Reflective Measurement Systems Ltd. The independent certification to EN1436, ASTM E1710 confirmed the accuracy of the measurement of the coefficient of retroreflected luminance (RL) of pavement striping at normal pavement speeds irrespective of lighting conditions day or night. “The industry now has a system that can accurately survey pavement striping to the left and right of the survey vehicle; center pavement markings such as directional arrows, symbols and warnings and also reflective pavement markers (RPMs/pavement studs). The day contrast ratio is also recorded. Not only can our system provide the measurements, but our sophisticated and powerful QuickView-Pro Reporting software system can record every pavement asset, geographically tag its location, and provide video evidence of the condition. The days of closing pavements for surveys or inefficiently surveying single lines with multiple journeys to survey a single carriageway are over. The potential savings on operator hours and fuel consumption is enormous, which is also good news for the environment”.
The RetroTek-D measurements were very closely aligned to a handheld retroreflectometer, with a mean absolute deviation of just 2.2% between both sets of measurements and no comparative values greater than +/- 7.5% as required by BASt, the German Federal Highway Research Institute.  This was particularly good as the samples were measured in a variety of different ambient brightness and also at different locations and when averaged over all samples, both the RetroTek-D & Delta LTL-XL hand-held retroreflectometer measuring systems provide nearly identical measured values: This indicates a  very good conformity as described in a report by Dr. Hans-Hubert Meseberg, vice-chairman of the German association StrAus-Zert, a government-approved evaluator of equipment for use on German roads.

Dr Meseberg included in the certification that the performance of the RetroTek-D was not affected by the different vehicle velocity at which the measurements were taken, or by the differences in lighting conditions ranging from very bright sunlight, twilight to darkness. The RetroTek-D Mobile Pavement Retroreflectometer is “deemed well suitable for dynamic measurement of the coefficient of retroreflected luminance RL of road markings according to … European Standard EN1436 and ASTM E 1710  and delivers the same results as a portable hand-held reflectometer [while being] independent of measuring speed [and] the kind or form of the road marking”.

The RetroTek-D will be available in North America in 2023. In the meantime the RetroTek-MU which is currently being used in Texas and California for pavement retroreflectivity surveys and operated by pavement striping companies, is providing the same level of functionality and accuracy for night surveys.

Vehicle manufacturers are accelerating the adoption of Advanced Driver-Assistance Systems (ADAS) with over 70% of all new cars to be equipped with Lane Departure Warning systems by 2023. This will inevitably increase the demands on pavement authorities and pavement survey companies across Europe to ensure pavement striping are properly maintained to support these pavement safety measures. The innovation packed RetroTek-D mobile retroreflectometer could not have come at a better time for the pavement industry.