GOLDEN, Colorado, 14 April 2020 – Golden Software, a developer of affordable 2D and 3D scientific modeling packages, has streamlined many workflows in the latest version of its Surfer® gridding, contouring, and 3D surface mapping product. These enhancements will save time for end users in oil & gas exploration, environmental consulting, mining, engineering, and geospatial projects.

“We have simplified workflows by making many of the most popular Surfer mapping processes more intuitive,” said Kari Dickenson, Surfer Product Manager. “By deleting steps and reducing mouse clicks, we have shaved valuable minutes off the time it takes to complete many functions.” 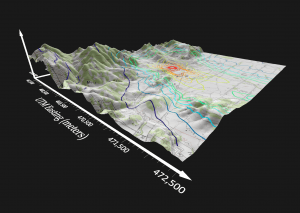 3D Views may be exported to a variety of high-resolution image formats.

Used by 100,000 clients worldwide, Surfer has been relied upon for more than 30 years by scientists in numerous disciplines to easily visualize and interpret complex data sets. Known for its fast and powerful contouring algorithms that regularly outperform more expensive packages, Surfer enables users to model data sets, apply an array of advanced analytics tools, and graphically communicate the results in ways anyone can understand.

Golden Software has made these time-saving improvements in the latest Surfer version released today:

Easier Base Map Editing – Users will no longer have to click Start/Stop Editing to make changes to base maps. Without interrupting the workflow, a user simply clicks on an item on the base map, and the program automatically enters Edit mode so changes can be made to the feature.

Convertible Scale Bar – Surfer now has a pulldown menu on the Scale Bar that allows users to convert the scale bar from one type of linear unit to another (e.g. feet to miles) on the fly. Users can even toggle back and forth between units. No manual calculation is required.

Make Colors Transparent – Users are able to select any color in an image or air photo and make it transparent. This is commonly used to eliminate the white borders that surround many satellite/aerial images.

3D Exporting – For insertion into reports and presentations, users may export 3D Views to a variety of high-resolution image formats including TIF, PNG, JPG, and BMP.

Simple Image Cropping – The enormous files sizes of imported air photos or satellite images can slow processing speed. Surfer users can now draw a polygon around their area of interest in an image or photo to crop out the unneeded data, resulting in a smaller file size and faster map editing.

Add Multiple Files – Users can select multiple map or layer files at once for importing into a Surfer project or applying certain functions. For example, a user can select five grid files to load as contour maps with a single click of the mouse.

Apply Actions on Multiple Layers – With a few clicks, the user can select multiple map items or layers and then apply functions to all of them. For example, the chosen layers or items – a few or hundreds – can be turned on/off, deleted, duplicated or their order may be changed.

Easier Cross Section Profiles – Users now have the option of generating a cross section profile by drawing a line across their map or simply selecting a polyline in an existing base layer.

As is the tradition at Golden Software, the company has released a Beta version of Surfer simultaneously with the new version to give customers a chance to try out new features while they are still in development. Users may find the Beta version by clicking File | Online from within Surfer.

“In Surfer Beta, we are working on delivering time-savings shortcuts that have been the most requested by our customers,” said Dickenson.

Here are the Beta features that Golden Software developers are working on for a late summer release in 2020: