Chelmsford, UK  — Teledyne e2v is proud to have supplied the single eye of the Characterizing ExOPlanet Satellite (CHEOPS) and congratulates ESA and the CHEOPS scientists for the successful completion of extensive testing of the CHEOPS instrument and detector.

The CHEOPS mission payload is based around a single frame transfer backside illuminated charge coupled device (CCD), supplied by Teledyne e2v, which is located in the focal plane of a 32 cm diameter on-axis telescope.

The device selected for the CHEOPS mission was done so in part based on proven heritage and reliability in space. The CCD47-20 image sensor is possibly the most used image sensor for space imaging missions, to date.

A list of the missions that the CCD47-20 has been used in can be found here, along with technical specifications. 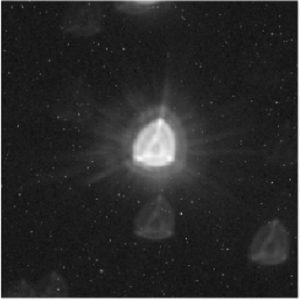 Carlos Corral van Damme, ESA’s System Principal Engineer for Cheops said: “The pointing is extremely stable: this means that while the telescope observes a star for hours while the spacecraft moves along its orbit, the image of the star remains always within the same group of pixels in the detector,” explained Carlos in an official announcement from ESA. Carlos continued: “Such great stability is a combination of the excellent performance of the equipment and of the bespoke pointing algorithms, and will be especially important to fulfil the scientific objectives of the mission. The thermal stability of the telescope and the detector has also proven to be even better than required.”

ESA’s CHEOPS mission lifted off on the 18th December 2019, heading for a low earth orbit (LEO), on the 8th January the science instrument containing the focal plane was successfully activated, followed by the opening of the telescope cover a few weeks later. Then, on the 7th February 2020 the first image was acquired using the CCD47-20 detector. As of April 16, 2020, ESA confirmed that routine science operations will commence by the end of April.

The first image referred to as a “perfect blur” was of a target star located around 150 light years away. The intentionally blurry image is a product of the specially designed telescope optics, which are deliberately defocused to maximise the precision of CHEOPS’ measurements.

CHEOPS will now carry this unprecedented study by measuring and characterizing the exact size of exoplanets (planets in other solar systems) to determine their bulk density.

Dr Paul Jerram, Chief Engineer at Teledyne e2v said: “We are delighted to be involved in another mission to discover and characterise exoplanets. Space missions have detected the large majority of exoplanets discovered so far and ground based telescopes using our CCDs, especially Kepler, and CHEOPS will follow up on those discoveries. Our knowledge of exoplanets will dramatically increase in the future when new instruments, for which we are currently making detectors for, are launched, more specifically, PLATO which will focus on detecting earth-like exoplanets and the WFIRST coronagraph which will directly image exoplanets.”

Teledyne e2v is a part of the Teledyne Imaging group. Their innovations lead developments in healthcare, life sciences, space, transportation, defense and security, and industrial markets. Teledyne e2v’s unique approach involves listening to the market and application challenges of customers and collaborating with them to provide innovative standard, semi-custom or fully-custom imaging solutions, bringing increased value to their systems.

In combination with its sister companies, Teledyne DALSA and Teledyne Imaging Sensors, three imaging powerhouses, together represent a new paradigm in the delivery of innovative imaging solutions built on unrivalled expertise and a deep technological heritage that includes capabilities across the spectrum, from infrared to x-ray imaging.

Teledyne Imaging is a group of leading-edge technology companies aligned within the Teledyne brand. With unrivalled expertise across the electromagnetic spectrum and decades of experience, the group offers world-leading capabilities in sensing, signal generation and processing. The collective delivers innovative solutions to aerospace, defense, geospatial, machine and industrial vision, medical and life sciences, semiconductors and MEMs.