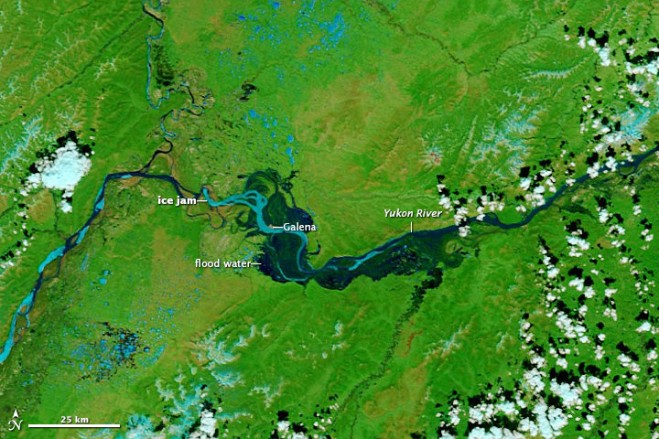 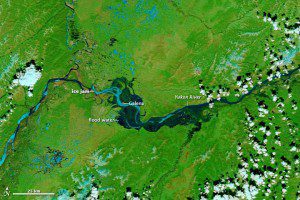 NASA’s Terra satellite captured this image of flooding along Alaska’s Yukon River near the small town of Galena on May 28, 2013, using a combination of visible and infrared light that make it easier to distinguish between water and land. River water appears navy blue; ice appears teal; and vegetation is bright green. Clouds are pale blue-green and cast shadows.

In May 2013, NASA’s Terra satellite observed a stubborn ice jam on the Yukon River that sent floodwater spilling over its banks into the small Alaskan town of Galena.

An ice jam is an accumulation of broken river ice caught in a narrow channel. A sharp bend in the river about 18 miles (29 kilometers) from Galena triggered the jam by preventing a large sheet of winter ice from flowing downstream. 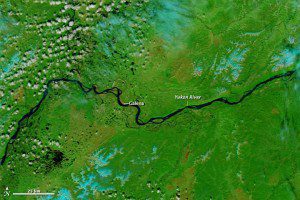 This image shows the area around Galena in 2012.

The blockage began on May 25, and ice and floodwater stretched more than 20 miles (32 kilometers) from the choke point by May 28. Galena residents saw waters surge more than 15 feet (5 meters) in the span of one night.

Most of the town’s 400 residents had evacuated by May 28, according to media reports. During the worst of the flooding, the town lost water and electricity. Most of the structures in the town saw significant flooding; many were swamped by as much as 7 feet (2 meters) of water. There’s concern that communities downriver of Galena also will face major flooding when the ice jam breaks up.