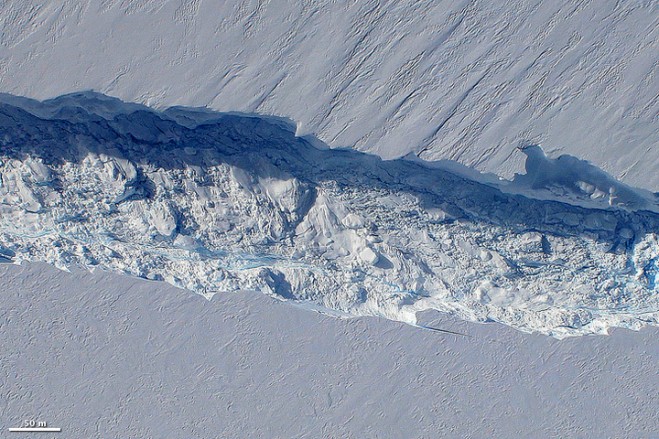 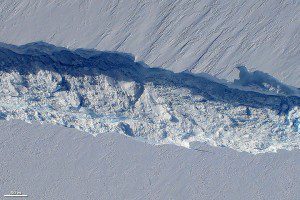 A NASA digital mapping system took this photo of a massive crack in Antarctica’s Pine River Glacier. Looking straight down from the belly of NASA’s DC-8 aircraft, it’s the first detailed airborne photo of the creation of a new iceberg.

Flying over Antarctica’s Pine Island Glacier in a DC-8 research plane, scientists participating in NASA’s IceBridge mission made a startling discovery onOct. 14, 2011: a massive crack running about 29 kilometers (18 miles) across the glacier’s floating tongue. The rift was 80 meters (260 feet) wide on average, and 50 to 60 meters (165 to 195 feet) deep. It marks the moment of creation for a new iceberg that should eventually span about 880 square kilometers (340 square miles) once it breaks loose from the glacier. 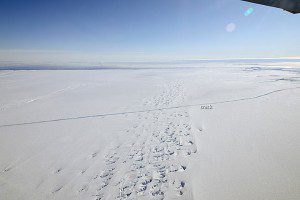 A passenger on the NASA DC-8 jet snapped this photo of the massive crack in the ice.

These photographs show the rift onOct. 26, 2011, when scientists returned to survey the glacier in greater detail. A digital mapping system took the top photo, looking straight down from the belly of the DC-8. The lower photo was taken by a passenger on the jet.

Birthing large icebergs is nothing new for the Pine Island Glacier. Among the fastest moving glaciers in Antarctica, Pine Island drains about 79 cubic kilometers (19 cubic miles) of ice per year from the West Antarctic Ice Sheet. The end of the glacier stretched about 48 kilometers (30 miles) past the edge of land, floating on the ocean. As more ice flows toward the water, the tongue grows longer. Eventually, a piece will break off, forming a large iceberg.

The last calving event occurred in late 2001 and resulted in an iceberg that measured 42 kilometers by 17 kilometers (26 by 11 miles). That event, too, was preceded by a large crack that was observed in satellite imagery in late 2000.

While satellites have tracked the formation of new icebergs, this is the first detailed airborne survey of such an event. “We are actually now witnessing how it happens,” said IceBridge project scientist Michael Studinger. “It’s part of a natural process, but it’s pretty exciting to be here and actually observe it while it happens.”

IceBridge scientists were surveying the Pine Island Glacier to learn how the glacier is changing and why. In the largest airborne survey of Earth’s polar ice, the airplanes of Operation IceBridge carry an array of instruments to measure the ice from top to bottom. The research team is gathering data about how thick the ice is (about 500 meters or 1,640 feet in the region of the crack), what the ground beneath it looks like and how the glacier has changed over time. All of this information will help scientists understand why the Pine Island Glacier drains so much ice to the ocean and how much it could contribute to sea level rise in the future.

“IceBridge exists because we need to understand how much ice the Greenland and Antarctic ice sheets will contribute to sea level rise over the next couple of decades,” says Studinger in a new feature article on NASA;’s Earth Observatory. “In order to do this, we need to measure how much the ice surface elevation is changing from year to year.” As a primary outlet for the West Antarctic Ice Sheet, the Pine Island Glacier is one of the largest sources of uncertainty in global sea level rise projections.

Operation IceBridge is now in the third of six annual field campaigns to Antarctica from Punta Arenas, Chile. “A lot of times when you’re in science, you don’t get a chance to catch the big stories as they happen because you’re not there at the right place at the right time,” said John Sonntag, instrument team lead for Operation IceBridge. “But this time we were.”