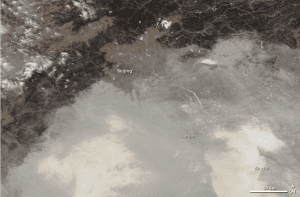 One common cause of poor air quality in the winter is a temperature inversion in which a layer of cold, dense air gets trapped beneath a more buoyant layer of warm air.

The recent haze decreased visibility in satellite images, too. A milky, gray pall entirely blocks the ground from view in the top image, taken in the early afternoon by the Moderate Resolution Imaging Spectroradiometer (MODIS) sensor on the Aqua satellite. Patches of white fog or low cloud hang below the gray haze. Winds had already begun to push the haze out of Beijing in the north, but the rest of the North China Plain still suffered from poor air quality. By the next day, when Aqua MODIS acquired the lower image, skies were mostly clear across the region.

One major constituent of haze is particle pollution, such as dust, liquid drops, and soot from burning fuel or coal. Particles smaller than 10 micrometers (called PM10) are small enough to enter the lungs, where they can cause respiratory problems. The density of PM10 reached 560 micrograms per cubic meter of air on Jan. 10, according to the Beijing Environment Protection Bureau. By contrast, U.S. cities exceed air quality standards when PM10 concentrations reach 150 micrograms per cubic meter.

But most of the pollution that makes up haze isn't PM10; it's finer particles, smaller than 2.5 micrometers in diameter (PM2.5). These particles can embed themselves deep in the lungs and occasionally enter the blood stream. The fine particles are highly reflective, sending sunlight back into space. The Chinese government does not currently measure PM2.5, but the U.S. Embassy in Beijing reports their measurements hourly in a Twitter feed. On the morning of Jan. 10, PM2.5 measurements were off the scale, though by afternoon they had dropped to moderate levels. The Beijing Environmental Bureau will start releasing PM2.5 measurements sometime before Jan. 23, the Chinese New Year.

The Chinese government is implementing a plan to monitor PM2.5 across the nation by 2016. Even with improved monitoring, winter haze events may be difficult to control. One common cause of poor air quality in the winter is a temperature inversion in which a layer of cold, dense air gets trapped beneath a more buoyant layer of warm air. As long as the temperature inversion persists, pollution builds in the trapped pocket of air near the ground. Such inversions often contribute to poor winter air quality in the Beijing region.