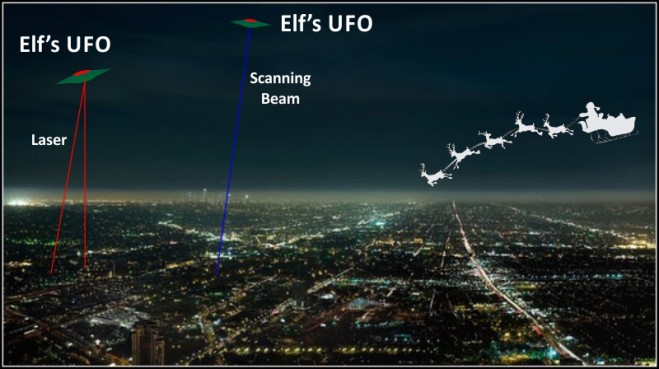 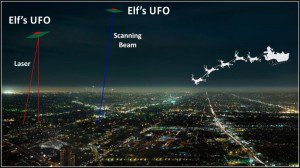 Some of Santa’s sub-systems are still classified, but the secret of Santa’s evasion strategy is “out of the bag” now. Click on image to enlarge.

How does Santa fly in and out of the world’s troubled hotspots without being detected by  early warning and detection systems? Santa relies on Elf Pilot Escort. Every gift-delivering sortie by Santa’s highly maneuverable sled is escorted by a stealth shield of elves piloting Unidentified Flying Objects (UFOs).

As we all know, Elf UFOs are undetectable by any human radar, infrared system or satellite. Indeed, over the years, there were numerous visual sightings of these Elf UFOs, mostly just before Christmas. The latest sightings of these UFOs were made near the India-China border. Local newspapers reported that yellowish spheres appear to lift off from the horizon and slowly traverse the sky for three to five hours before disappearing. Those obviously were student Elf pilot training sorties.

We also know that Elf UFOs are armed with smart weapons, similar to what we mortals call Directed Energy Weapons (DEWs). These smart weapons are designed to hit a target with precision and render the target useless without causing any casualties.

Elf pilots scout each planned gift delivery site in search of hostile forces. Once they give the green signal, Santa can zoom into the target zone and go about his business unmolested.

If the Elf pilots locate hostile threats in the landing zone, they use the Battle Management System (BMS) on their UFOs to direct their incapacitating DEWs. Off-board sensors and onboard infrared tracking and range-finding sensors provide the needed data. The forward-mounted Beam Control System (BCS) powers the DEWs, ensuring target acquisition and prompt delivery.

We’re working on learning more and will bring you the information as it becomes available. In the meantime, we wish Santa a safe flight and a happy delivery! And the Earth Imaging Journal staff wishes children and adults all over the globe a very merry Christmas and happy holiday season!

Image and narrative courtesy of the Market Info Group.