September 15, 2020
Western U.S. Smoke From Fires Stretching Across the Country 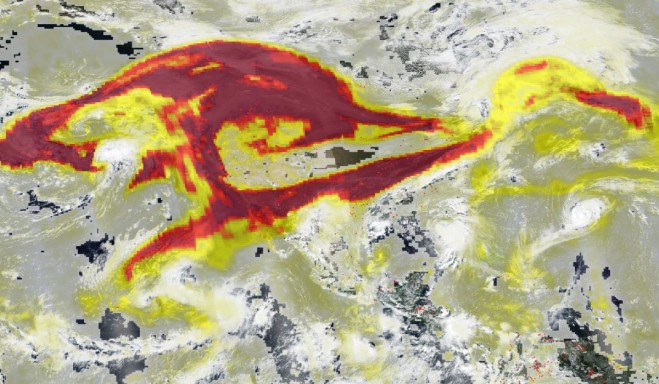 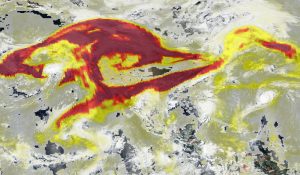 Using the OMPS (Ozone Mapping Profiler Suite) instrument aboard NOAA/NASA’s Suomi NPP satellite, aerosols are detected and measured in terms of thickness and height of the atmospheric aerosol layer. For most atmospheric events involving aerosols, the AI ranges from 0.0 (colorless through light yellow, yellow, orange, and red) to 5.0 (deep red), with 5.0 indicating heavy concentrations of aerosols that could reduce visibilities or impact health. (Credit: NOAA/NASA/Worldview)

NOAA/NASA’s Suomi NPP satellite captured recent images of the United States showing that the winds have changed yet again, blowing the smoke from western fires back to the East and crossing the continental United States. Along with the smoke, small particles suspended in the air (aerosols) are also moved along the jet stream and bring hazardous air quality across the country. This image shows the aerosols that accompany the traveling smoke. Aerosols are a mixture of small particles and chemicals produced by the incomplete burning of carbon-containing materials such as trees, grasses, peat, brush, etc. All smoke contains carbon monoxide, carbon dioxide and particulate matter (PM or soot). The smaller the particles, the easier they are to be inhaled and absorbed into the lungs.

From the EPA website: “The biggest health threat from smoke is from fine particles. These microscopic particles can penetrate deep into your lungs. They can cause a range of health problems, from burning eyes and a runny nose to aggravated chronic heart and lung diseases. Exposure to particle pollution is even linked to premature death.”

A study published in Nature Geoscience in May 2017 showed that particle pollution from wildfires, long known for containing soot and other fine particles known to be dangerous to human health, is much worse than previously thought. Naturally burning timber and brush from wildfires release dangerous particles into the air at a rate three times as high as levels known by the EPA, researchers at Georgia Tech found. The study also found wildfires spew methanol, benzene, ozone and other noxious chemicals. Residents that smell smoke or see haze in the air should take precautions against breathing too much of it and stay tuned to local air-quality information.