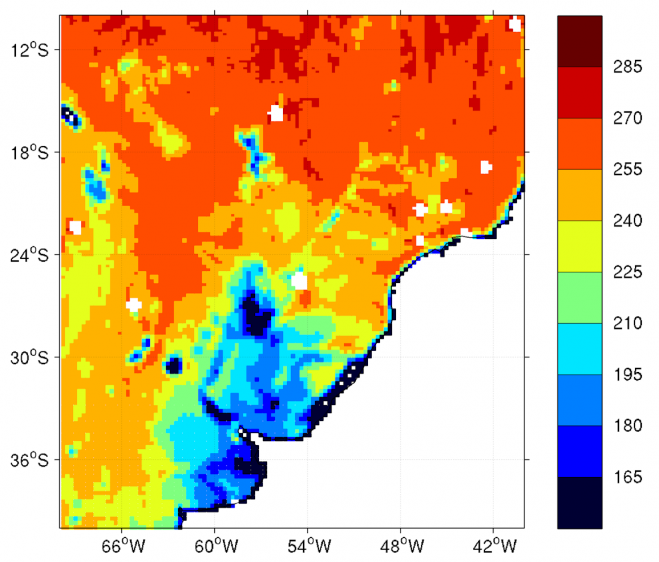 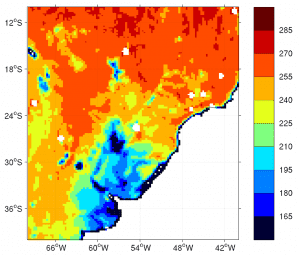 This map shows brightness temperature (K) observations from the SMOS mission over an area in South America, including parts of Brazil, Uruguay and Argentina. The map was generated using observations from July 11-20, 2010.

The European Space Agency’s SMOS satellite was designed to map soil moisture and ocean salinity, and now it has shown that it also can “see” through vegetation to provide a better understanding of Earth’s carbon cycle.

The SMOS water mission carries a novel microwave sensor to capture images of “brightness temperature” to derive information on soil moisture and ocean salinity. This information is improving our understanding of Earth’s water cycle. However, SMOS is showing itself to be a versatile tool and extending its usefulness to other areas of Earth science.

Surpassing expectations, SMOS is also being used to monitor thin Arctic sea ice, map freezing soil, determine wind speeds under hurricanes and monitor ocean eddies. Extending the value of SMOS even further, studies have shown that monitoring wetlands could be added to the mission’s repertoire.

Because SMOS measures emitted radiation at a rather long wavelength of 21 cm, vegetation and the atmosphere have little effect on the observations. This means it’s possible to look at how wetlands change over time. Such information is extremely valuable for our understanding of the role that wetlands play in the carbon cycle and how they contribute to atmospheric methane.

It is widely appreciated that wetlands are important resources of freshwater and are rich in biodiversity. It is less well known, however, that wetlands also emit large quantities of methane. In fact, they contribute more methane to the atmosphere than any other natural source. Wetlands can also be both sources and sinks of carbon.

Although there’s less methane in the atmosphere than carbon dioxide, methane is a much more powerful greenhouse gas. It is estimated that atmospheric methane was responsible for about 20 percent of the rise in global temperatures last century. Methane emissions are mostly a result of human activity, but wetlands are thought to be responsible for about 20–40 percent of global emissions.