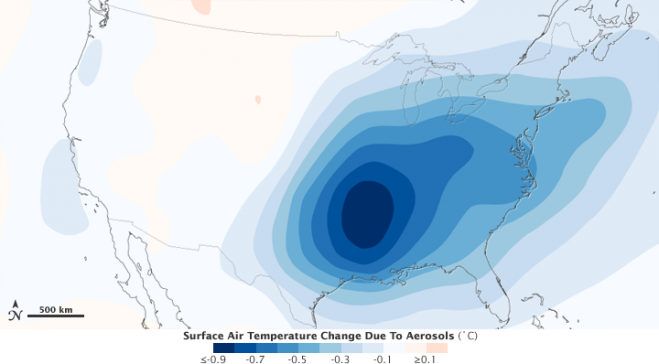 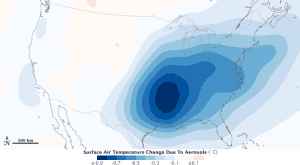 Between 1970 and 1990—the period when sulfates were at their highest levels—average temperatures were nearly 1° Celsius (1.8° Fahrenheit) cooler in a core area centered on Arkansas and Missouri and about 0.7° Celsius cooler in a larger tear-drop region throughout the Midwest and Mid-Atlantic.

Climate scientists have taken to calling the large area of cooling a “warming hole,” because the areas surrounding it have warmed at a faster rate. For more than a decade, researchers have puzzled over what’s causing the warming hole over the United States.

Previous research has suggested natural variations in sea surface temperatures might be responsible, but a new study puts the focus on sulfates, a type of aerosol produced by coal power plants that’s known for causing acid rain. Sulfates are light-colored, and they cause cooling by scattering and reflecting sunlight. They also lower temperatures indirectly by making clouds more reflective and long-lasting.