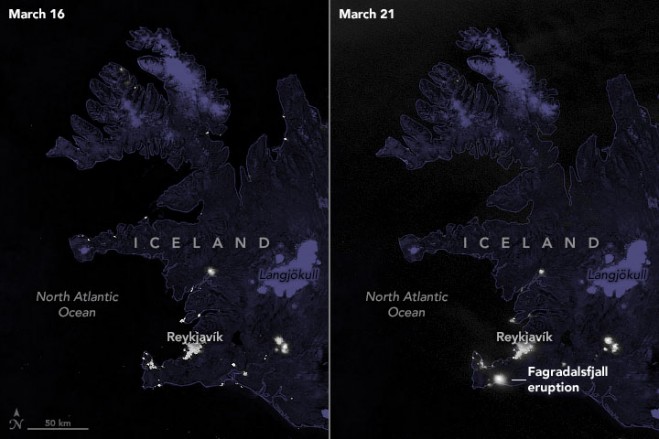 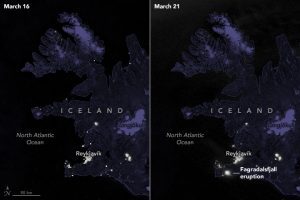 Swarms of small earthquakes in February 2021 on Iceland’s Reykjanes peninsula had experts warning that magma was moving beneath Geldingadalur valley and could soon erupt. Late on March 19, an eruption officially began as lava broke through the surface near Fagradalsfjall, one of several shield volcanoes on the peninsula.

Although small in comparison to other recent eruptions in Iceland, the event was bright and large enough for NASA and NOAA satellites to observe. On March 21, 2021, the Suomi NPP satellite acquired a nighttime view of western Iceland through a thin layer of clouds. Reykjavik, Reykjanesbær and other cities appear as bright spots in the image. The eruption appears as a new patch of light on the southwestern part of the island.

Lava poured from a fissure that was initially 500 to 700 meters (1,600 to 2,300 feet) long. It successively built up and then broke down mounds of cooled lava called spatter cones. Aside from crowds of onlookers and a possible archaeological site, not much has been threatened by the lava so far. Neither ash or gas emissions have been problematic either. Nonetheless, the Icelandic Meteorological Office is monitoring the volcano and is sharing the results of a forecast model.