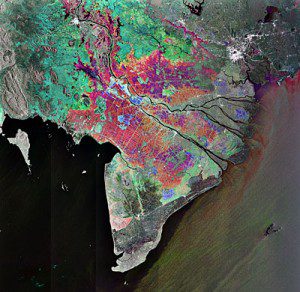 The European Space Agency's Envisat satellite collected this image of Vietnam's Mekong Delta where the Mekong, the world's 12th longest river, fans out into tributaries and empties into the South China Sea in Southeast Asia.

Last November, Japan announced it will provide a 40-year loan of about US$93 million (7.2 billion Japanese Yen) to Vietnam for equipment and capacity development connected to the bilateral satellite initiative.Â The first two satellites are due to be launched in 2017 and 2020, according to Shohei Matsuura, senior advisor with the Japan International Cooperation Agency (JICA) in Hanoi.

Matsuura said the satellites will track data that will provide background information for future industrial development and land-use planning, as well as support Vietnam’s national efforts to prepare for climate change and natural disasters.

“Climate change is one of the biggest obstacles to development in South-East Asia,” Matsuura told SciDev.Net. “We want to assist Vietnam to take measures against climate change and natural disasters, and this will also be helpful to the surrounding countries.”

Last year, Vietnam, Cambodia and Thailand were ravaged by heavy flooding that claimed hundreds of lives and caused millions of dollars in damages. Vietnam is believed to be one of the most vulnerable countries to climate change. It experiences heavy rainfall and has a low-lying coastline. Nearly four in five Vietnamese people live within 100 kilometers of the coast, and natural disasters kill more than 450 people each year, according to the United Nations.

The satellites are just one component of Vietnam’s preparation to become a regional leader in space technology. State media reported in November that a National Space Centre will be built outside Hanoi, at a cost of more than US$600 million, with the goal of providing a research facility for communications, weather forecasting and search and rescue activities. Reached by phone last week, officials at the state-run Space Technology Institute in Vietnam declined SciDev.Net’s request for comment.

The United States has also expressed an interest in helping Vietnam to develop its space programme. In December, Michael O’Brien, associate administrator for international and interagency relations for the U.S. National Aeronautics and Space Administration (NASA), visited Hanoi and Ho Chi Minh City, the first senior NASA official to have done so. During his visit, O’Brien signed a statement of intent with Vietnamese officials affirming “strong bilateral interest in cooperation on space-based research, including Earth science, weather research, remote sensing, and educational activities,” according to the U.S. Embassy in Vietnam.