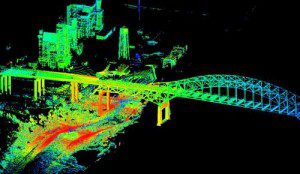 The portable instrument allows scientists to quickly generate 3-D maps of buildings, dams, levees and other structures as well as show areas of storm damage.Â  In a four- to five-minute scan, the instrument collects millions of topographic data points in a full 360-degree view to quickly produce accurate topographic information and can map areas up to two-thirds of a mile away.

USGS will use the information gathered from this pilot project to develop 3-D models of streets and structures, including the levels floodwaters reached and current water levels, in the form of an interactive 3-D flood inundation map. The map will help identify where the potential threat of future floodwaters is greatest and determine the extent of wind and flood damages caused by Isaac.