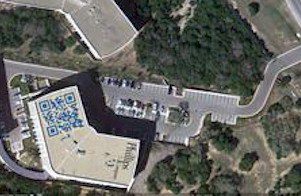 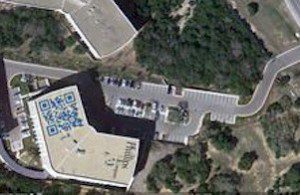 Roof-top QR codes visible on Google Earth or Google Maps are being installed by Phillips & Co. as part of its Blue Marble services. Phillips & Co. has no formal partnership with Google Earth, but Google is aware of its services, according to Rich Phillips, the company’s president. Phillips said the idea for Blue Marble struck him while working in the satellite industry.

“There’s this space economy,” he said. “Space is not just a destination. It is a platform for applications and services. We are looking at satellite images more than ever before. Google is where we live. … Satellite imagery was only used by those in real estate; now it’s part of our culture.”

Phillips & Co. has partnered with Austin-based 44 Doors to offer marketing analytics and data management around the QR codes.

“We hope campaigns are built around this. It is just one tactic that is part of a larger campaign,” Phillips said.

Will people go to Google Earth to leverage the QR codes?

“I think it depends on the customer,” Phillips said, adding that Phillips & Co. is in talks with several big-box retailers and one federal agency.

According to Phillips, retailers make ideal candidates for QR code rooftop advertising. For instance, a mall owner, such as Simon Property Group Inc. (NYSE: SPG), would be able to sell its rooftop space to retail tenants. A business would have to own its property or receive its landlord’s permission before installing a QR code sign.

Phillips & Co. charges $8,500 to install a QR code that the company said will be updated by Google Earth within three months. The company has developed a schedule for Google Earth updates in its top 100 markets based on information from various sources. In addition, there’s a recurring $200 monthly support fee for marketing consulting and analytic services.