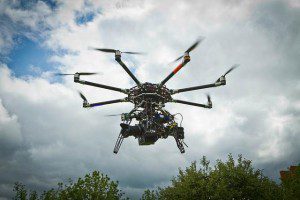 A large semi-autonomous drone capable of monitoring radiation levels after a release of nuclear material in the environment has been developed by Bristol University researchers.

The unmanned aircraft system, called the ARM, can also measure surface temperature and provide photographs of the affected area. The Bristol team believes the system could be valuable in situations such as the Fukushima Daichi nuclear disaster.