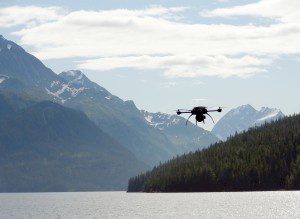 The University of Alaska Fairbanks Geophysical Institute and BP Exploration Alaska demonstrated the use of a three-pound unmanned aircraft, called “Scout,” as a way of gathering 3-D aerial data to aid in oil spill clean-up efforts. Through the use of this technology, oil spill responders can complete Shoreline Clean-up and Assessment survey work with minimal impact on the shoreline or critical habitat.

The University of Alaska received approval from the Federal Aviation Administration to operate the unmanned aerial vehicle in Alaska for research purposes. The demonstration focused on improving oil spill response and clean-up capabilities in the difficult terrain and conditions seen in Prince William Sound.

BP funded the demonstration that took place in mid-July, and representatives from the U.S. Coast Guard and the Alaska Department of Environmental Conservation also participated.

Aeryon Labs of Waterloo, Ontario, designed the Scout as a multipurpose imaging and surveillance platform. The Scout is battery powered and has a range of up to 1.8 miles. Its flight duration lasts up to 25 minutes with a payload and can reach a maximum speed of 30 miles per hour.

The unmanned aerial vehicle is capable of retrieving high-resolution georeferenced images of the coastline, stitched together to form a complete mosaic of the region of interest and used to generate a 3-D reconstruction of the area.