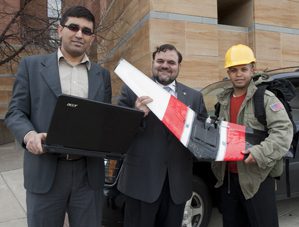 Researchers field tested their 5-pound drone over a contained wildfire in West Virginia.

“What we are designing is a complete system,” says Kelly Cohen, associate professor of aerospace engineering and engineering mechanics, in a news release. “It is low-cost and low-risk. That is important for this application because, while the technology is ready, firefighters are not quick to adopt new technologies.”

The team just tested its bot”which weighs about 5 pounds with a 54-inch wingspan and the ability to fly faster than 35 mph to altitudes of 10,000 feet”over a small, contained forest fire on Nov. 5 in West Virginia.

“This test was a clear demonstration of the potential for this technology to limit wildland fire damage by saving money, lives and land,” says Robert Charvat, the graduate student leading the team who also participated in firefighter training while in West Virginia.

The system could also be designed to suit other situations, such as floods, earthquakes and even air traffic control. Presumably it, unlike its flawed human counterparts, won’t suffer “controller fatigue” and fall asleep on the job.