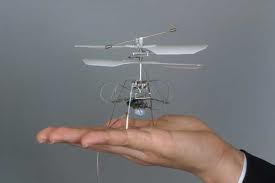 This micro-helicopter UAV from Seiko Epson Corp. fits in the palm of your hand and is designed to carry a micro camera.

At the 2011 Defense and Security Equipment International conference Sept. 13-16 in London, military contractor Thales introduced Spy Arrow, a lightweight air vehicle that the French armed forces are using in Afghanistan. Its ability to be carried by a single soldier and fly itself are attributes that were seen in several systems on the showroom floor.

U.S. company Aerovironment announced the development of Shrike, a small take-off and landing unmanned air vehicle (UAV) with a line of sight stretching more than three miles. Shrike weighs just 5 pounds, with tiny rotors on both ends. It was designed to bring infantry units reliable intelligence. It is in the same vein of the company's Raven system, which the U.S. Army has been buying in droves for operations in Afghanistan.

During a brief presentation on the show floor Sept. 14, Army Maj. Gen. Robert M. Brown, deputy for acquisition and systems management, talked about providing troops useful equipment. One of the biggest Army missions is surveillance, he said, while pointing to a picture of a soldier tossing a UAV into the air.

Aerovironment also chose to display a model of its Switchblade system, which turns a mini-UAV into a weapon that flies toward a target and detonates. The U.S. Air Force and Army have been seekingÂ a combination drone-warhead forÂ special operators who may be pinned down and under fire.

Other micro-UAVs on display include Selex Galileo’s Crex-B, and Elbit System's Skylark, which is used by militaries in Australia, Croatia, Czech Republic, Poland and Israel, among other countries.

Also in attendance was Babcock International Group, the service provider for Maveric, an unmanned aircraft that also brings autonomy to a handheld platform. Manufactured by Oregon-based Prioria Robotics Inc., Maveric features bendable and foldable wings that wrap around a fuselage which fits into a 6-inch tube. It weighs just 2.5 pounds and can be launched by a soldier even while he is lying down.

The Maveric has a wingspan of 29.5 inches and can track targets from an altitude of up to 25,000 feet. The wings feature both an ultra-light, black carbon material as well as tear-resistant fiber that help give the aircraft the appearance of a bird in the air. It can cruise at 30 mph and speed up to 63 mph.

Maveric can fly and land itself, but a simple joystick can be used if needed. The aircraft has software that allows it to detect and avoid cluttered scenarios along a pre-determined flight path. Companies also are bringing more brains to larger drones. Thales is finishing up tests on the Watchkeeper, a UAV that will replace the Hermes 450, which U.K. pilots have remotely controlled for more than 50,000 hours in operation. But there is no guy flying the Watchkeeper, said Nick Miller, business director for UAV systems at Thales.

Soldiers can simply highlight an area of interest on a map on a ground control station monitor, and the vehicle will determine its own route to deliver the desired images and ask troops to sign off on the mission. The system also knows when to turn its radar off and on.

Soldiers can instruct the UAV to remain in a specific airspace or track an individual vehicle. On one of the control station's monitors, users can keep an eye on the movement of dismounted targets as well. A single control station can be used to operate three aircraft at once.

Thales has enjoyed unprecedented access to airspace in the United Kingdom for flying the Watchkeeper, according to Miller. Training flights will take off from a busy airport and allow the UAV to integrate with other military air traffic.

We have permission to fly over populated areas, Miller said. It's a really important step forward.

The United Kingdom has dedicated airspace for UAVs such as Watchkeeper, even though it does not have sense-and-avoid systems. This issue has mostly kept unmanned systems out of the national airspace in the United States. According to Miller, Thales is working on a system that would allow its drones to see and avoid other aircraft on its own.

In the meantime, the British Army plans to begin using Watchkeeper in Afghanistan by the end of the year. And even though more of the aircraft's operations have been automated, it still requires the attention of five soldiers, including one to analyze images and another to deliver messages to other troops.

Nothing is fully autonomous, Miller said.

He paused and added: Well, maybe way in the future something will be.