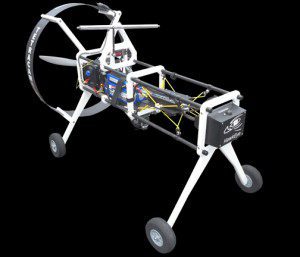 The Tetracam HawkEye is a low-speed, short-endurance UAS tailored to the needs of farmers and agronomists managing relatively small”one square mile or less”plots of land. The HawkEye can carry any of the family of lightweight Tetracam Agricultural Digital Cameras to capture complete aerial panoramas of a section of farmland or forest.

The university is leasing two small UASs from Boeing Co. to fly over 50 acres of potato fields at the Hermiston Agricultural Research and Extension Center as well as 1,000 acres at a private farm west of Boardman.

Equipped with cameras capable of zooming in on a single plant leaf, the suitcase-sized aircraft will take photographs from above that project leaders hope can detect whether plants are getting enough water and fertilizer. If successful, the information will let growers react more quickly to problems they might not identify right away with the naked eye.

According to Hermiston Station Director Phil Hamm, researchers will artificially stress different sections in the potato field to test if the cameras are effective at monitoring crop health. Early detection of stresses mean farmers can take quick action to repair the damage.

Boeing Research & Technology approached OSU last fall about working on opportunities for the aircraft. The Federal Aviation Administration recently approved flying the vehicles up to 400 feet in altitude, though Hamm said they can cruise low enough to identify even a single insect.

In Hermiston, TetraCam's eight-pound HawkEye will fly over the research station. It has a maximum flight time of 30 minutes, and is held in the air by a parachute. A second delta-winged aircraft, called the Unicorn, will fly over Boardman. Launched into the air by a bungee cord that acts as a slingshot, the vehicle weighs six pounds and has a wingspan of about six feet.

Both aircraft include cameras able to measure different wavelengths of light, such as infrared. Infrared is reflected strongly by healthy plants, but less so by unhealthy plants, which could indicate to growers where certain crops in the field may be underwatered or underfertilized.