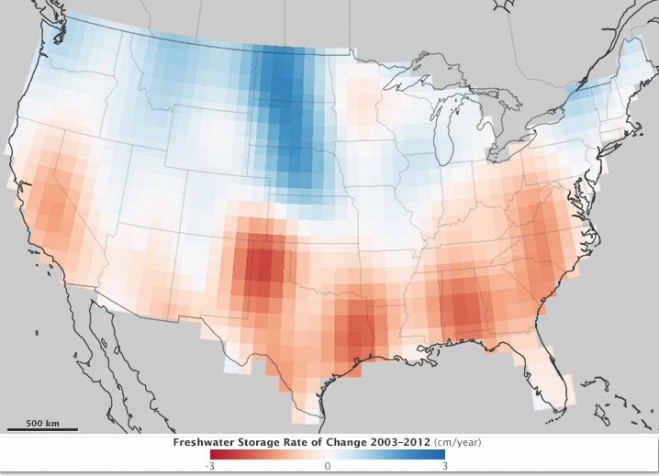 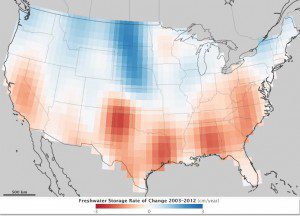 This map shows how water supplies have changed between 2003 and 2012. GRACE measures subtle shifts in gravity from month to month. Variations in land topography or ocean tides change the distribution of Earth’s mass; the addition or subtraction of water also changes the gravity field.

Nearly a decade of gravity measurements from NASA’s twin GRACE Earth observation satellites show that some parts of the United States could face hard times in coming years.

Adapting to climate change will require more than fortifying coastlines and preparing for warmer temperatures. It will require a careful look at how we manage our water resources. During the past decade, groundwater supplies have decreased in California’s Central Valley and in the Southern High Plains (Texas and Oklahoma)—places that rely on ground water to irrigate crops.

Eastern Texas, Alabama and the Mid-Atlantic states also saw a decrease in ground water supplies because of long-term drought. On the other hand, the flood-prone Upper Missouri basin stored more water over the decade.

The problem is only going to get worse over time, according to the most recent climate report published by the Intergovernmental Panel on Climate Change. “The contrast in precipitation between wet and dry regions and between wet and dry seasons will increase,” warn scientists in the report.