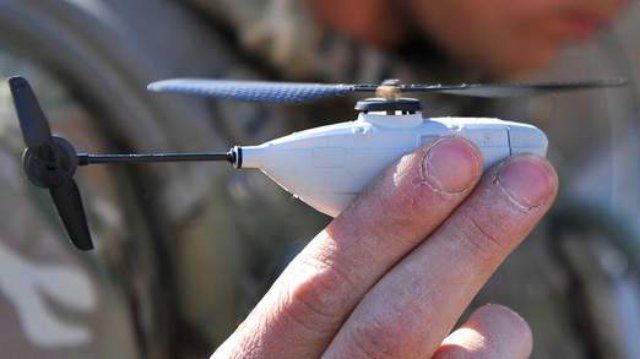 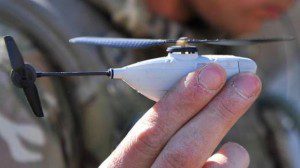 The Black Hornet UAS, shown here in the hand of a British soldier, is the size of a child’s toy, measuring just 10 cm (4 inches) by 2.5 cm (1 inch) and is equipped with a tiny camera. British troops reportedly are using it in Afghanistan to peer around corners or over walls to identify potential hidden threats. The captured images are relayed to a small screen on a handheld terminal. The U.S. Army also is interested in the UAS.

The U.S. Army reportedly is interested in experimenting with two tiny Black Hornet unmanned aircraft systems (UASs) that can fit in the palm of a hand, take photos and record video, according to a service spokesman.

The systems are made by Norwegian-based Prox Dynamics AS. The Army announced its intent to buy the two systems in a Jan. 29, 2013, notice posted to the Federal Business Opportunities website, which notes the company is the sole source for the technology.

While Prox Dynamics wouldn’t discuss any possible sale, the PD-100 Black Hornets already are in service with the British Army in Afghanistan, company spokesman Ole Aguirre wrote in a Feb. 4, 2013, statement to the International Trade Administration.

“The major difference between the Black Hornet and all other systems is the extreme small size, as the air vehicle weighs only 16 grams, thus being the world’s first operational nano system,” wrote Aguirre.

The procurement of the two Black Hornet UASs “is one of the early steps of our recently initiated Cargo Pocket Intelligence, Surveillance and Reconnaissance (CPISR) effort,” Army Natick Soldier Research, Development and Engineering Center spokesman David Accetta wrote in a Feb. 6 statement. The Black Hornets will be procured under the Research, Development and Engineering Command Foreign Technology Assessment Support program. The effort will feed into what he called the “Technology-enabled Capability Demonstration 1b Force Protection—Soldier/Small Unit.”

Image courtesy of Prox Dynamics AS.