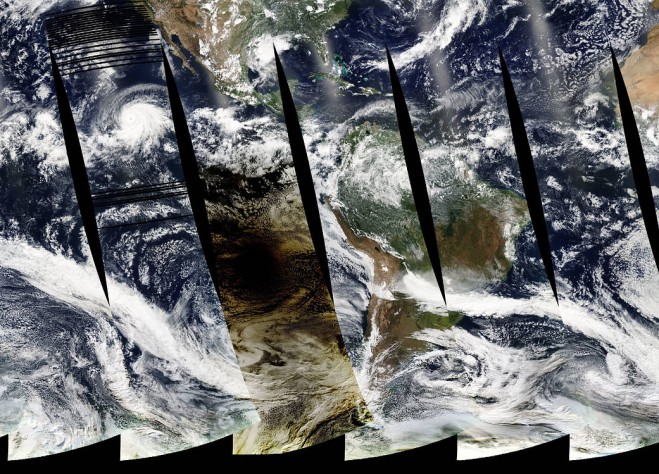 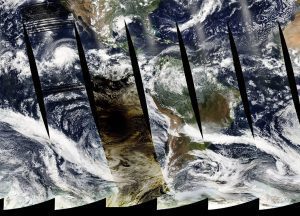 On July 2, 2019, skywatchers in the beach city of La Serena, Chile, looked up at 4:38 p.m. local time to see a black circle in the sky. The rest of the sky was shaded in orange twilight, and the temperature near the ground momentarily dropped by a few degrees. It wasn’t a sign of the apocalypse, but a total solar eclipse—when the Moon passes directly between the Earth and the Sun, and completely obscures the disk.

As eclipse chasers were looking up, NASA satellites were looking down at Earth’s surface. The Moderate Resolution Imaging Spectroradiometer (MODIS) sensor on the Aqua satellite captured this view of the Moon’s shadow as it traveled eastward across the South Pacific. The shadow cast by an eclipse consists of the completely darkened umbra and the partially shadowed penumbra.

Aqua has a polar orbit, and the MODIS sensor collects imagery in swaths that are roughly 2,330 kilometers (1,450 miles) wide. This image is a mosaic comprised of data collected at three different times. The left third of the image was collected at 21:40 Universal Time, after the shadow had passed. The middle swath was captured at about 20:00 Universal Time, when the eclipse was in progress over the South Pacific. The right third shows Chile between 18:13 to 18:32 Universal Time (2:13 to 2:32 p.m. local time), before the shadow passed. The black gaps in the image are places near the Equator (Earth’s widest point) where MODIS swaths do not meet on a given day.

How is the Moon able to obscure the Sun when it is 400 times smaller in diameter than the star? It’s all about the Moon’s orbit. The Moon travels around Earth in a slightly elliptical path—like a squashed circle with the Earth at its center. As a result, the Moon is not always the same distance from the Earth. When it is closest, the Moon appears slightly larger than when it is far away. During a total solar eclipse, the Moon is 400 times closer to Earth than the Sun is to Earth, offsetting the 400 times difference in diameter.