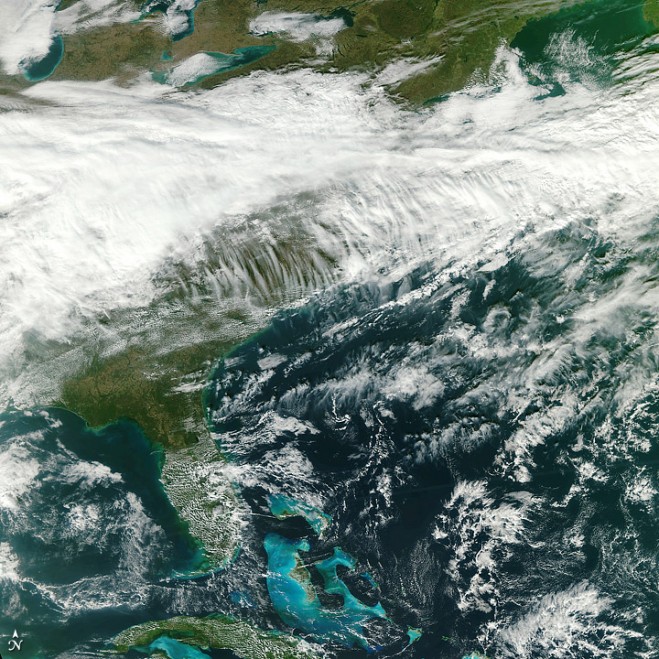 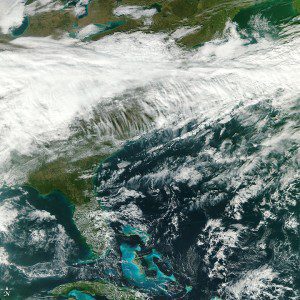 A VIIRS image shows a broad swath of eastern North America from the Great Lakes to Cuba.

“This image is a next step forward in the success of VIIRS and the NPP mission,” said James Gleason, project scientist for the National Polar-orbiting Operational Environmental Satellite System Preparatory Project at NASA’s Goddard Space Flight Center.

NPP was launched on Oct. 28, 2011, and recently reached its final orbit at an altitude of 512 miles (824 kilometers). The satellite operations team has powered on all of the instruments, and the spacecraft is now traveling around Earth at 16,640 miles per hour (eight kilometers per second).

VIIRS is the largest instrument onboard NPP, weighing in at 556 pounds (252 kilograms). Its data, collected from 22 channels across the electromagnetic spectrum, will be used to observe Earth’s surface, including fires, ice, ocean color, vegetation, clouds, and land and sea surface temperatures. NPP downloads its data to ground systems engineered by Poway, Calif.-based SeaSpace Corp.

“The task now for the science community is to evaluate VIIRS performance and determine the accuracy of its data products,” said Chris Justice, a professor of geography at the University of Maryland, who will use VIIRS data in his research. “These long-term data records are critical in monitoring how Earth’s surface is changing—either from human activity or through climate change.”