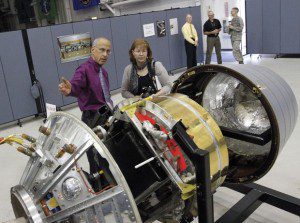 Lynn Clock, left, an electrical engineer with Lockheed Martin, talks with NRO's Karen Furgerson at Vandenburg Air Force Base about the recently declassified KH-7 Gambit satellite return vehicle, which was used to carry 3,000 feet of film shot in space back to Earth.

In a move toward a more efficient National Reconnaissance Office (NRO), analysts for the agency operating the nation’s spy satellites are on the verge of getting their information through a top-secret open-source cloud environment housing intelligence data. Jill Singer, the agency’s chief information officer, offered the latest details on the project at last week’s Red Hat Government Symposium in Washington, D.C.

Now in the second of a five-year Optimizing IT Strategy plan, NRO’s team recently moved to the top-secret, hybrid version of what began as a private classified cloud. It’s also part of the larger intelligence community’s cloud migration and data analytics efforts.

In his talk, Vandenberg Revealed: The Declassified Reconnaissance Satellites That Changed the Course of the Cold War, Outzen spoke about the recently declassified Gambit and Hexagon satellites that operated from 1963 to 1984.

Officials consider Gambit and Hexagon among the most important U.S. photo-reconnaissance systems and credit them for helping the United States win the Cold War. The U.S. spy satellite programs arose out of concerns about airborne platforms after downed airplanes meant lost air crews and airplane technology falling into Soviet possession.