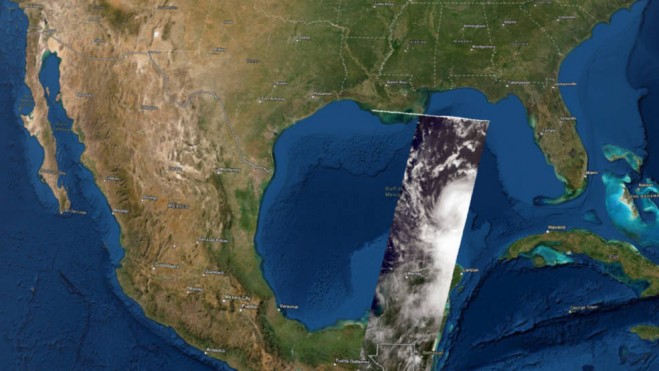 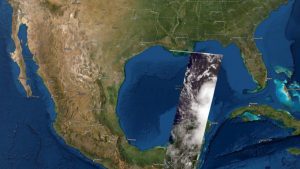 A still image of a 3D visualization of the cloud tops of what would become Hurricane Laura, as seen on Aug. 25, 2020, by the MISR instrument aboard NASA’s Terra satellite. (Credit: NASA Disasters Program, Esri)

On Aug. 25, 2020, several days before Hurricane Laura made landfall as a destructive Category 4 storm in Louisiana, NASA’s Terra satellite flew over Laura in the Gulf of Mexico. Using its Multi-angle Imaging SpectroRadiometer (MISR) instrument, the satellite collected data on wind speeds and cloud-top heights as the storm intensified and moved northwest toward the U.S. Gulf Coast.

The NASA Earth Applied Sciences Disasters Program Geographic Information Systems (GIS) team worked closely with representatives from the Esri 3D team to produce the first-ever interactive 3D visualization of MISR cloud-top height data and publish it to the NASA Disasters Mapping Portal. Cloud-top height data can be used to examine the structure of tropical storms and identify features that may indicate future strengthening or weakening of the storm system. In this visualization, some higher clouds seen near the center of the storm may indicate a building eyewall. In other storms, features such as “hot towers” can be identified—clouds of warm, moist air within the eyewall that extend high into the atmosphere and indicate potential rapid intensification for hurricanes. MISR also captures data on the direction and velocity of wind at the cloud tops, which aids researchers in better understanding a storm’s structure and potential development.

The MISR instrument carries nine fixed cameras, each of which views the scene from different angles over a period of about seven minutes. The motion of the clouds between different views is then used to derive their height and velocity.