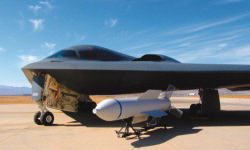 There is growing interest in a U.S. aviation force”perhaps based primarily on existing aircraft in an effort to save shrinking defense dollars”that could carry out precision surveillance and strike missions thousands of miles away.

That capability would be particularly useful in the Pacific Rim where U.S. bases are sited far from several hot spots. Chief among those are the mineral riches of the disputed South and East China seas, the pirate-ridden Malacca Strait, the human- and drug-smuggling routes into sparsely populated northern Australia, illegal fishing in almost every country's territorial waters and the transfer of prohibited nuclear and missile technologies from North Korea.

Connecting the airborne platforms”and the extremely important output of their sensors”would be a largely autonomous network based on cooperating super computers and sophisticated data links. The network would handle intelligence, sifting it for targets and monitoring all the allied aircraft in-theater for their location, fuel, sensors and weapons. Once a target of interest is located, super computers at the heart of the network would analyze the activity and decide whether additional surveillance is needed. The target also would be scanned for electronic activity. If a strike is deemed necessary, available weapons”explosive, electronic or cyber”would be deployed.

The Heterogeneous Airborne Reconnaissance Team (HART) system is being designed to glue all these elements together.

HART as now used is an information collector and tasker, says Scott Winship, a veteran Northrop Grumman team leader for prototype systems. It puts [information] into a big holding tank [using cloud computing]. It's mostly based on real-time video, electro-optical (EO) and infrared (IR) images, and the process for putting together a signals intelligence (sigint) package. We task and integrate sensors and then turn any of that collected data into usable information and new collection tasks.

Other specialists hint at the technology's potential. An integrated next-generation sigint design, for example, might be able to see a push-to-talk radio, confirm its identify and tag it. An autonomous unmanned aerial system (UAS) could then follow, via video, the cell phone and the car it is in. When the phone rings, the collector would be able to capture and understand the conversion.

In an associated effort, the U.S. Air Force has established an RQ-4 Global Hawk UAS reconnaissance center on Guam. Moreover, Global Hawk is becoming part of a larger intelligence networking construct that includes the National Reconnaissance Office (NRO) and the National Geospatial-Intelligence Agency (NGA). The latter organization is focused on understanding what is on Earth, why it is there, its meaning and the context of its activity. By adding real-time UAS surveillance, analysts can start anticipating events.

[NGA's role] really is activity-based intelligence and what might happen next, says its director, Letitia Long. So we're moving into more of an anticipatory mode. We bring as many pieces of information as we can by using [multi-intelligence] fusion and non-traditional sources.

It takes what we know about the Earth's physical features, both natural and man-made, and adds to it imagery, Long says. We get imagery from anyplace we can. That includes commercial radar imagery [and via] national technical means such as satellites that NRO builds for us. [Also in use are] both foreign and domestic commercial images, airborne manned and unmanned, hand-held [digital cameras] and increasingly, non-traditional sources [such as social media]. We're concentrating on strengthening analysis through bringing in those different sources of information and looking for different phenomenology as new sensors and technologies are introduced.

Winship, who has slipped in and out of Northrop Grumman's black world in recent years, is now immersed in HART in conjunction with the Defense Advanced Research Projects Agency (DARPA) and other aerospace companies such as BAE Systems and Lockheed Martin.

HART has three projected layers so far. The top one is to provide the strategic command function. The bottom enables tactical sensor collection. The middle layer”for decision-making, tasking and data fusion”appears to be the most complicated and is shared by many companies that each develop diverse, specialized algorithms.

In the middle is the fusion that we're trying to get together on with DARPA in a program called ˜Insight,' Winship says. It ties together all the information and then tasks it. Our part of the middle layer is to enable HART to be the engine that goes out and collects what is commanded. In an expanded version, [Insight] figures out what needs to be collected and tells HART to go do it. HART comes back with the information, asks who needs it and [what else] is needed.

NGA's Long described her agency's work as development of algorithm-manipulated, activity-based intelligence that is parsed in a way to determine what might happen next. This anticipatory capability is associated with the fusion of lots of data from sensors with diverse phenomenology.

HART can be all of that, plus tasking assets to get the [additional] data to put the puzzle together, Winship says. Certain kinds of intelligence”sigint, elint, EO/IR and images”can generate a pattern. We're knitting all those things together in order to provide information from a lot of disparate data.

Data are sent from a portable computer that directs a small UAS, for example, to the operations center and elsewhere. Along each step of the way, additional computers enable more storage, integration and fusing of data, enabling the system to become a real-time generator of information.

The next substantiation of HART will be to enable different kinds of sensors and information to be on the network, Winship says. After that, the task will be to put a much more strategic layer on it [enabling] it to handle longer distances, bigger files and larger imagery. That will build out of the middle layer.

There is at least the vision of a reconnaissance-strike network with a theater-wide footprint.

It would be possible to create a network that would reach from Hickam [AFB, Hawaii] to collect information on the Pacific Rim, Winship says. But that's not what we're about right now. . . . [A]s long as there are the data links, we don't care what the information gatherer is or where it comes from. It doesn't matter if you are in the South China Sea or Kandahar, [Afghanistan].

The HART technology also could be scaled and transferred to both the strike and reconnaissance worlds.

I'm a big believer in long-range strike, and I've been slugging away at [unmanned combat air systems] for a long time, Winship says. [Some of us believe] that's the way technology ought to move to get a good capability [for penetrating defenses]”which unmanned allows”and HART is a piece of that.

No matter what is done with long-range strike, whether sea- or land-based, algorithms like these enable long-range, persistent UAVs. Algorithms that disconnect long, boring missions from the constant attention of an operator are something that has to be done anyway.

There are other combat benefits if some basic problems can be solved.

It's easy for me to do a briefing on unmanned combat air systems, but there is very little that can knit all these things together, Winship says. With HART, we're enabling these little, inexpensive UAVs and making them ˜no-kidding' targeting weapons.

Raytheon also is addressing the concept. Researchers there have completed the first test of the Miniature Air Launched Decoy Jammer (MALD-J) in a simulated operational environment. The 300-lb. MALDs, some in free flight and others in captive-carry, demonstrated they could protect manned aircraft through electronic attack while operating as part of a manned aircraft strike package.