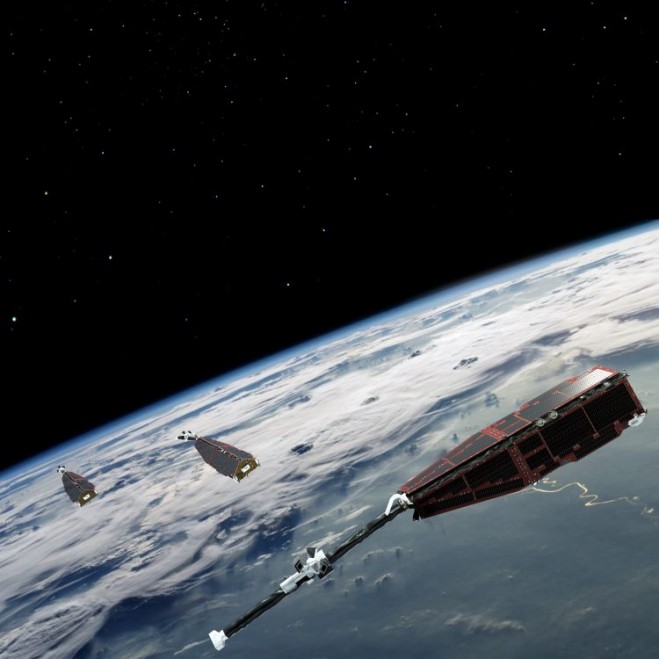 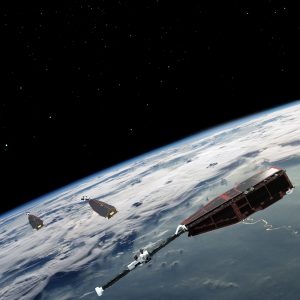 Two Swarm satellites orbit almost side-by-side at the same altitude, while a third satellite is in a higher orbit and at a slightly different inclination. The different orbits optimize the sampling in space and time, distinguishing between the effects of different sources and strengths of magnetism. (Credit: ESA/AOES Medialab)

The magnetic field shields humans from cosmic radiation and charged particles that bombard Earth from the sun. Scientists hope to learn more about this protective field to understand many natural processes, from those occurring deep inside the planet to weather in space caused by solar activity. This information will then yield a better understanding of why Earth’s magnetic field is weakening.

When salty ocean water flows through the magnetic field, an electric current is generated and this, in turn, induces a magnetic response in the mantle below Earth’s crust. Thanks to Swarm’s precise measurements along with those from Champ—a satellite mission that ended in 2010 after measuring Earth’s gravity and magnetic fields for more than 10 years—scientists have been able to find the magnetic field generated by ocean tides and image the electrical nature of Earth’s upper mantle 250 kilometers below the ocean floor.

“These new results are important for understanding plate tectonics, the theory of which argues that Earth’s lithosphere consists of rigid plates that glide on the hotter and less rigid asthenosphere that serves as a lubricant, enabling plate motion,” noted Alexander Grayver from the Swiss Federal Institute of Technology.

Rune Floberghagen, ESA’s Swarm mission manager, added, “We have very few ways of probing deep into the structure of our planet, but Swarm is making extremely valuable contributions to understanding Earth’s interior, which then adds to our knowledge of how Earth works as a whole system.”