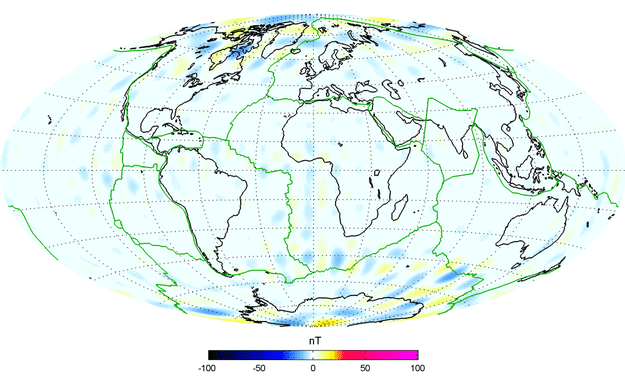 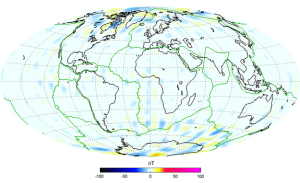 Swarm data were used to generate a model of the magnetic field from Earth’s lithosphere. The image compares the Swarm model with a Chaos-4 model and shows good agreement, especially considering Swarm is still only in the calibration and validation phase of its mission. The colors in the image show differences between the two models.

Launched just five months ago, the European Space Agency’s trio of Swarm satellites is delivering results with a precision that took earlier missions 10 years to achieve.

Engineers have spent the last five months commissioning the identical satellites and carefully guiding them into their orbits to provide the crucial measurements that will unravel the mysteries of Earth’s magnetic field.

Swarm has a challenging task ahead. Together, the satellites will measure and untangle the different magnetic readings that stem from Earth’s core, mantle, crust, oceans, ionosphere and magnetosphere.

In addition, information will be provided to calculate the electric field near each satellite, an important counterpart to the magnetic field for studying the upper atmosphere. Two satellites are now orbiting almost side by side and have started their operational life at 462 km altitude. The third is higher, at 510 km. The readings made at different locations will be used to distinguish between the changes in the magnetic field caused by the sun’s activity and signals that originate from inside Earth.

Swarm is now in its fine-tuning phase, but already it has produced enough information to build models of the magnetic field for comparison with existing models. This proves that only a few months of Swarm data agree well with a decade or more of predecessor missions.