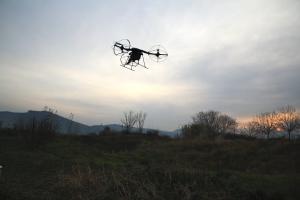 StillFly, a small unmanned aircraft, hovers over a stretch of land in the Naples countryside where, more than two decades ago, the Camorra mafia buried two trucks carrying toxic waste.

StillFly is a three-winged, five-pound, battery-powered drone that flies a few feet above the ground. The drone’s heat-sensing camera and gas sensors transmit data to a monitoring station. Its sensors were designed to work as a small, portable lab.

“It’s like forensic police on the scene of a murder but re-adapted for environmental crime,” says Massimiliano Lega, an environmental engineer.

StillFly is now being tested to zero-in on riverbeds, farmlands and industrial sites in several areas in Italy, according to Forest Ranger Marco Di Fonzo. He says this kind of technology could be much more economical and effective than doing surveillance in a helicopter. StillFly already has helped put a few polluters to trial—a farmer accused of channeling buffalo waste into a river and a mozzarella maker who allegedly dumped tanks of whey brine. The unmanned aircraft also spotted a cargo ship rinsing out its tanks in the Gulf of Naples by night.