Editor's Note: The following information is a description of the event submitted to onorbit.com by Keith Cowing. 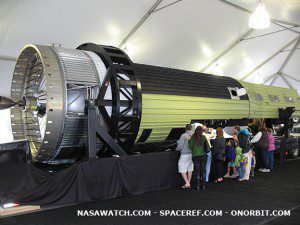 A KH-9 Hexagon spy satellite as seen from its aft end upon entering the exhibit tent.

The display is up for one day only. Word of this display only leaked out late on Friday (Sept. 16). No media advisories were issued”and no KH-9 press release is listed on the museum's site. I could not get NASM officials at the exhibit to comment on the short notice or why the satellite was there. But all you had to do was go inside and see that a large party was being set up for the 50th anniversary of the National Reconnaissance Office. Reception tables and chairs were being set up under the SR-71 and Space Shuttle Enterprise.

A large tent with diesel electric generators was set up in the parking lot next to the museum. Inside the monstrous satellite was on display”no prohibitions on photos whatsoever. Of course, you could not touch the hardware. I have seen lots of space hardware up close, but the condition of this spacecraft was rather remarkable given that it has been in storage for nearly three decades.

It was also somewhat surreal to actually see this monster: 60 feet long at 10 feet in diameter, it is longer than anything ever put into a Space Shuttle cargo bay.

Up until now the only public description of vehicles like this is the result of the persistent diligence of analysts such as Charles Vick and John Pike.

According to Wikipedia: “KH-9 HEXAGON, commonly known as Big Bird, was a series of photographic reconnaissance satellites launched by the United States between 1971 and 1986. Of twenty launch attempts by the United States Air Force, all but one were successful. Photographic film aboard Big Bird was sent back to Earth in recoverable film return capsules for processing and interpretation. They are also officially known as the Broad Coverage Photo Reconnaissance satellites (Code 467), built by Lockheed Corporation for the US Air Force.”

The spacecraft on exhibit (obviously) never flew and was lacking its solar arrays and the optics and some other components were removed. In addition some “windows” have been cut into the side of the vehicle so that you can see inside. Otherwise this spacecraft is in remarkably pristine condition.