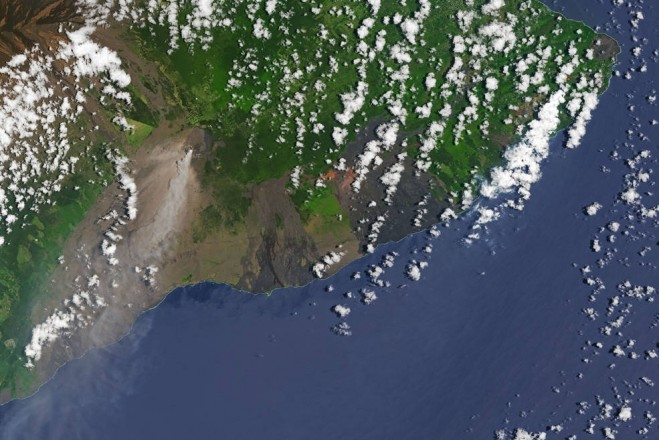 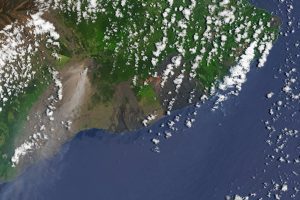 The Landsat-8 satellite captured a plume of steam rising above the summit of Kilauea volcano on May 14, 2018. A few weeks prior, on May 3, Kilauea had erupted along its East Rift Zone, initiating months of volcanic activity that would destroy hundreds of homes along the southeastern portion of the island. (Credit: NASA Earth Observatory images by Joshua Stevens, using Landsat data from the U.S. Geological Survey)

In May 2018, Kīlauea volcano on the island of Hawaii erupted, touching off months of intense activity. Through August 2018, incandescent lava from fissures spewed hundreds of feet in the air, and billowing ash clouds reached as high as six miles into the atmosphere. Huge lava flows inundated land up and down the Pacific island’s southeast coast, destroying hundreds of homes.

Volcanoes erupt when molten rock called magma rises to the surface, and many factors, from the shape of the volcano to the composition of the magma, factor into the timing of eruptions. In the case of Kīlauea, a new, NASA-funded study published April 22, 2020, in the journal Nature points to another eruption factor: prolonged, sometimes heavy rainfall in the months leading up to the event.

“We knew that changes to water content in Earth’s shallow crust can trigger earthquakes and landslides, and now we know that it can also trigger eruptions,” said Falk Amelung, professor of geophysics at the University of Miami Rosenstiel School of Marine and Atmospheric Science and co-author of the study. “Under pressure from magma, wet rock breaks easier than dry rock inside the volcano. That, in turn, forges pathways for magma to travel to Earth’s surface.”

First, for the 2018 Kīlauea eruption, researchers ruled out a common cause: increased pressure in the magma chamber, which, when it becomes great enough, is able to break through the surrounding rock. Scientists can infer increased magma pressure by observing the inflation, or rise, of the surrounding rock. “This pressurization causes the ground to inflate by a few tens of centimeters,” Amelung explained. “As we did not see any significant inflation in the year prior to the eruption, we started to think about alternative explanations, which led us to investigating precipitation.”

Using a combination of ground-based and NASA satellite measurements of rainfall, the researchers modeled the evolution of fluid pressure caused by sustained rainfall that accumulated in the volcano’s interior—a factor that can directly influence the propensity for magma to break through the surrounding rock, ultimately driving volcanic activity. Based on pre-existing laboratory data and numerical simulations, their model results suggest that, in early 2018, fluid pressure had been at its highest in almost half a century, weakening the volcanic edifice, which the authors propose enabled magma to break through confining rock beneath the volcano and lead to the subsequent eruption.