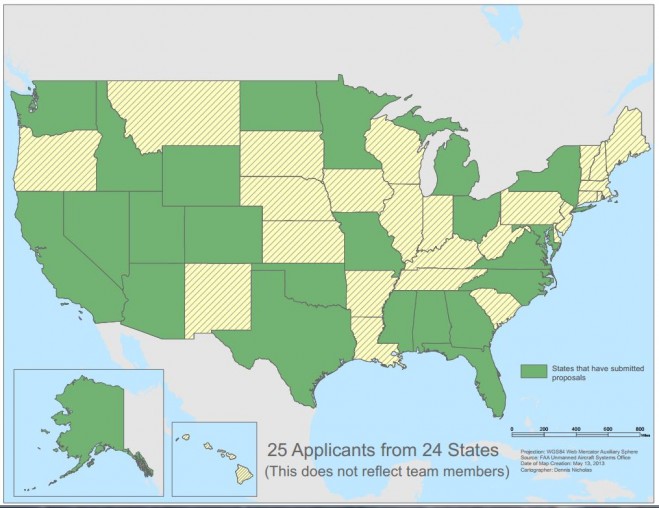 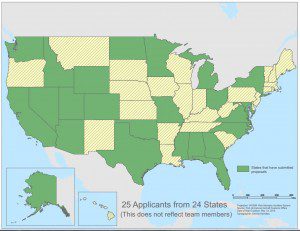 States highlighted in yellow have submitted proposals to FAA for UAS test sites.

The Federal Aviation Administration (FAA) will select six test sites for unmanned aircraft systems (UASs), and competition among states for the sites is heating up. Wyoming, North Carolina, Utah, Ohio, Minnesota, Oklahoma and North Dakota all had booths at the Association for Unmanned Vehicle Systems International (AUVSI) conference in Washington, D.C., Aug. 12-15, and some of them were quite lavish.

Ohio was giving away cookies shaped like the state. North Dakota and Oklahoma had huge booths that included semi-enclosed meeting areas. Utah had a large inflatable snow yeti holding a model of a drone designed in-state. All this was staged to convince members of the crowd, and ultimately FAA, that their corner of the United States is on the verge of becoming the Silicon Valley of drones.

The FAA Modernization and Reform Act of 2012 requires the agency to select six UAS test sites to study the safety of UAS and certify commercial drones for use in the national airspace. The competition is fierce, because the test sites hold the potential to create thousands of jobs and millions of dollars in tax revenue, not counting the profits from commercial applications that will be tested at the sites. FAA received 25 applications from 24 states for the six spots earlier this year and is expected to make a decision in December.