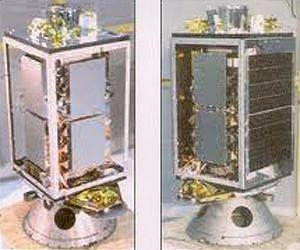 Launched into orbit on Oct. 6, 1981, UoSAT-1 was designed and built by a team from the University of Surrey led by Surrey Satellite Technology Limited (SSTL) founder Sir Martin Sweeting. SSTL exploited the rapid advances being made in the late 1970s in microelectronics to enable the team to build a tiny but sophisticated satellite using the technology found in everyday consumer products. As a result, UoSAT-1 was much cheaper, lighter and quicker to build than comparable existing satellites, and so the first modern “microsatellite” was born.

Sir Martin said: “Thirty years later we continue to exploit the amazing technological advances in consumer products to bring affordable space exploration to SSTL’s customers, with a range of small satellites spanning 6kg to 600kg for Earth observation, communications and navigation services. Working with the Surrey Space Centre on new concepts for small satellites, SSTL maintains its highly innovative approach–challenging and changing the economics of space.”

Between 1979 and 1981 a dedicated team of four staff and eight part-time academics worked day and night to build this first British amateur spacecraft, learning satellite design and construction “on the fly.” Using donated materials and a home-made clean-room, UoSAT-1 was the pioneer of the cost-effective “commercial off-the-shelf” (COTS)-based small satellites for which SSTL has become synonymous.

In the early 1980s satellite equipment was purpose-built for space at huge expense taking many years, so the technology used was often obsolete by launch. With limited onboard storage and processing power, the Earth observation and science satellites of the day were micro-managed using expensive worldwide ground station networks to command them and gather data as they orbited the globe. The mass production that fed the public’s appetite for microcomputers made microprocessors and memory suddenly affordable.

Fundamentally changing the design and operation of microsatellites allowed the university and its spin-out company, SSTL, to build smaller satellites that were much cheaper to launch and didn’t require a network of ground stations, making space accessible to everyone and not just the global superpowers of the day. Onboard computing also made it possible to de-risk systems, using software to reconfigure systems in the event of problems and provide flexible features to support experiments and failsafe operation.

Since UoSAT-1 was launched 30 years ago, SSTL has continued changing the economics of space by innovation. By continuing to adopt the latest COTS technologies and configuring them for use in space, SSTL ensures that innovation and economics are at the forefront of its satellite design. Its latest platform, the SSTL-50, is designed to fly new sets of systems on each mission and is geared to launching new technologies into space quickly and economically.