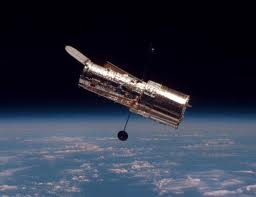 One of two telescopes left over from a failed spy satellite program and donated to NASA by the National Reconnaissance Office could wind up orbiting the Red Planet someday.

NASA is pondering uses for the two giant spy telescopes, which are comparable in size and appearance to NASA’s venerable Hubble Space Telescope. Some scientists have proposed sending one of the powerful telescopes to Mars orbit, where it could look both up and down, giving researchers great views of the Red Planet’s surface as well as targets in the outer solar system and beyond.

The two donated telescopes were apparently built for a National Reconnaissance Office program called Future Imagery Architecture, which is said to be one of the most costly failures in the history of U.S. spy satellite projects and was terminated in 2005. NASA announced in June 2012 that it had acquired the instruments, which are designed to have a much wider field of view than Hubble, despite sporting Hubble-like 8-foot-wide (2.4-meter) main mirrors.