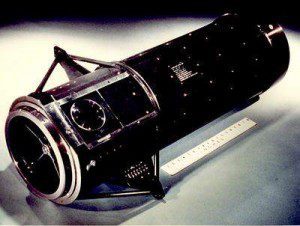 A model of the lens built by Kodak workers for the Gambit spy satellites that were active from 1963 to 1984.

For 50 years, members of a clandestine team kept secret their innovative work on the Gambit, Gambit 3 and Hexagon spy satellites that circled Earth and took high-resolution photographs of Soviet Union missile facilities and other strategic sites from the early 1960s to the mid-1980s.

The images gave the United States vital information about the Soviets’ nuclear capabilities, which set the tone for negotiations on nuclear stand-down and arms reduction agreements between the two nations.

Les Mitchell of Pittsford, a retired project manager with a department at Kodak known as “research and engineering,” and his more than 1,000 colleagues were sworn to secrecy about the projects. Their families were among those in the dark—even about their loved ones’ locations when they traveled.

“One of the things that we helped the U.S. learn and know was that there was no missile gap with the Soviet Union,” said Mitchell, 87.

“It was the Cold War, and we were all scared to death—people were building basement bomb shelters and worrying about having those Soviet ballistic missiles come over here and blow up things.

Kodak designed and built the camera, lens and film-handling systems for the Gambit, Gambit 3 and Hexagon satellites. Up until a couple of weeks ago, the company’s involvement was a tightly held secret. But with the official declassification of the projects, local systems designers, builders and support staff can now talk about their contribution to history.

“I’ve lived all these years with this secret and many other secrets in my head,” said Dave Schaeffer, 82, a Kodak security officer assigned to the projects. “But now that some have been disclosed, it gives you a better sense of yourself.”

The spy satellite programs were declassified at a gala celebration of the National Reconnaissance Office’s 50th anniversary on Sept. 17. The NRO is a federal defense and intelligence department that is responsible for “developing, launching and operating America’s signals, imagery and communications intelligence satellites.”

Three of the department’s satellites were displayed at the event at the Smithsonian National Air and Space Museum’s Steven F. Udvar-Hazy Center at Dulles International Airport in Virginia. The one-day show was by invitation only and not open to the public.

But it gave Mitchell, Schaeffer and their families who attended the gala an opportunity to take a quick glimpse at the camera and film systems they helped to develop decades ago in Rochester.

“Nobody knew that Kodak was involved in these programs because it was all classified,” Mitchell said. “The guys who worked on the project could finally tell their spouses and families what they were doing all those years, and we are real proud of it. But for me personally, it’s too bad because my wife (Lillian) died four years ago. So I did not have the pleasure of being able to tell her.”

An invitation-only event was scheduled for Sept. 30 at the George Eastman House

in Rochester, N.Y., hosted by ITT Corp., which in 2004 purchased what had become Kodak’s space systems division, a business originated by George Eastman in the World War I era to help the United States with military surveillance.

“It’s important to ITT that we honor the Rochester men and women who worked on these top-secret reconnaissance satellite programs,” said Christopher Young, president of ITT Corp.’s geospatial systems division in Rochester. “The groundbreaking work they accomplished and the contributions they made to U.S. national security are extraordinary.”

Joseph Westbay, vice president and director of engineering at ITT’s geospatial unit, said developing the imaging systems for the satellites was an extraordinary effort. The systems had to be designed and developed from scratch.

“I think some of the systems we build today would look very familiar to these guys,” he said.

The geospatial systems division employs almost 1,500 people locally, many of them in the manufacture of optics for defense, surveillance and weather satellites.

Mitchell said the satellites were feats of engineering and design based on the incredible demands of space flight and the mission. The camera systems had to be built so that they would not only be able to survive a violent rocket launch but also the weightlessness of space and the extremes of cold and heat.

They also had to develop a way to retrieve exposed film from space. The Hexagon satellite, for example, carried about 60 miles of high-resolution film made by Kodak.

“Basically you have a great big camera with a huge lens which is taking pictures of the Earth, and when they get all the film exposed they wind it up in a recovery capsule,” Mitchell said.

“It separates from the satellite and it re-enters the atmosphere coming down on a parachute, and the Air Force has some neat aircraft that are fitted up with something called a trapeze to catch a descending capsule with the film in it.”

The declassification is bringing back memories for the people involved. The job meant a lot of hard and exciting work with a great deal of travel and secrecy. Mitchell said he was constantly darting back and forth from Rochester to Vandenberg Air Force Base in California, where the launches took place.

If family needed to reach him or other members of the team in an emergency, they knew to call Dave Schaeffer. Project members would also have to travel as individuals, hiding any affiliation with Kodak or the projects because of security concerns.

“Because all of the work was classified, that included some of the relationships,” Schaeffer said.

“Eastman Kodak is known as a photographic company, of course, and the government agencies that we were doing business with did not necessarily want a particular operation associated with photography.”

For Patrice Mitchell, this has been a revelation about her father’s work.

“We knew he did something interesting,” she said. “But we never knew what he did. No one did.”