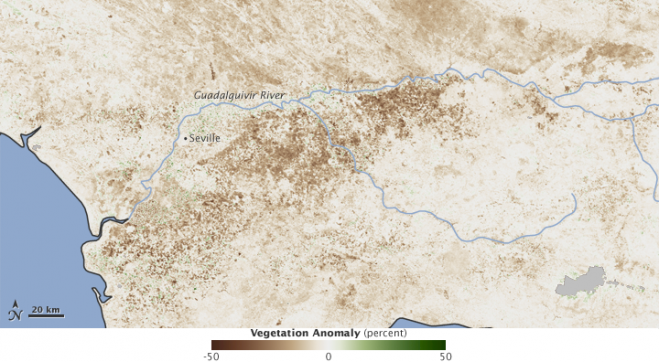 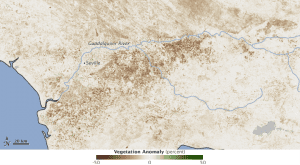 Grain crops in Spain are suffering after an unusually dry autumn and winter, during which rainfall amounts have been half of normal in key grain-producing regions.

This map, made with normalized difference vegetation index (NDVI) data from the moderate-resolution imaging spectroradiometer (MODIS) instrument on NASA’s Terra satellite, focuses on Andalucía, a region in southern Spain that produces almost all of the country’s durum wheat.

The map compares plant growth between April 6 and 21, 2012, with average growing conditions for the same period. Brown indicates areas where plants are growing less vigorously than usual for this time of year. Gray indicates areas where data weren’t available. Only about half the normal amount of rainfall fell in Andalucía between January and April.

In an analysis released on May 10, 2012, the U.S. Department of Agriculture’s Foreign Agricultural Service projected Spain’s wheat production would drop by 20 percent, oats by 18 percent, and barley b