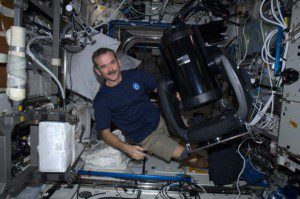 Canadian astronaut Chris Hadfield is shown with ISERV, a modified Celestron telescope that will be used by astronauts for Earth observation.

Astronauts on the International Space Station (ISS) will be using a new modified Celestron telescope to acquire Earth imagery for disaster analysis and environmental studies.

Called ISERV (International Space Station SERVIR Environmental Research and Visualization System), the telescope is a new remote-controlled imaging system. It’s the first of what is hoped to be a series of ISS Earth-observing instruments, each to feature progressively more capable sensors to help scientists gain operational experience as well as help design better systems in the future. Scientists envision that future sensors could be mounted on the station’s exterior for a clearer, wider view of Earth.

Essentially, it will be pointed out of one of the windows of the Space Station and used for Earth imaging, especially for natural disasters and to help countries that may not have their own Earth-observing satellites to help assess damage and assist with evacuations, Andrea Tabor, social media coordinator for Celestron, told Universe Today. ISERV will be installed in the Window Observational Research Facility in the station's Destiny laboratory.