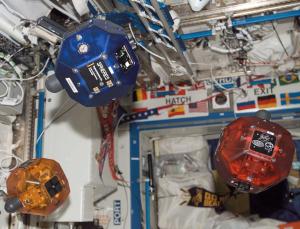 In a test aboard the ISS the robots successfully maneuvered around an “unknown” object floating in microgravity. Using their cameras and internal gyroscopes to navigate, they maintained a safe distance from the object as they filmed it.

Sharp-eyed mini robots that will protect the International Space Station (ISS) and repair defunct satellites have been flight-tested aboard the space station. ISS regularly changes orbit to avoid colliding with derelict satellites, rocket stages and other objects whizzing around Earth at thousands of kilometers per hour. Soon robots may fly out to assess the danger presented by the vast array of objects not already tracked by radar.

Alvar Saenz-Otero and his colleagues at the Massachusetts Institute of Technology have built several self-guided robots. Each is a little smaller than a soccer ball and designed to investigate potentially damaging objects from a safe distance with a 3-D stereo camera. The images are relayed to the ISS crew, who can decide how to proceed.

The risks a space object poses need to be assessed without putting people in danger, but even robots must give unknown objects a wide berth. “Inspection is not a low-risk activity,” says Saenz-Otero. “An autonomous inspector could collide with the object and make problems worse. So very good sensors must be used to allow the vehicle to move safely around the object it is inspecting.”