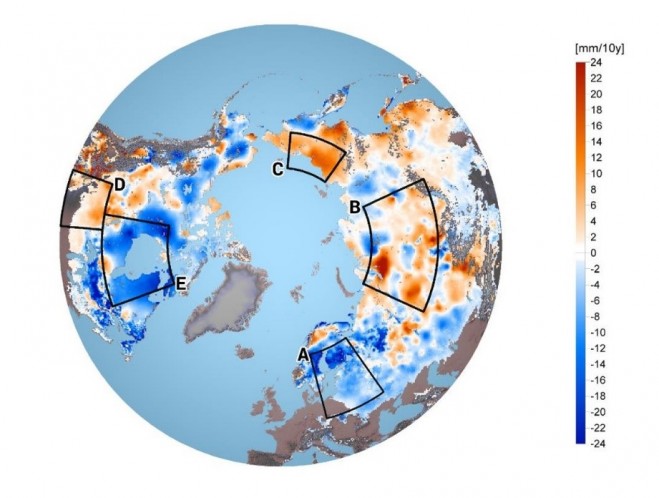 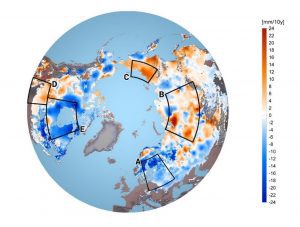 Changes in snow mass between 1980 and 2018. In areas A-E, large regional changes in the amount of snow are observed. In the blue areas (A, E) the snow mass has decreased, in the red areas (B, C, D) the snow mass has increased. The scale is the change in the water value of snow in millimeters per 10 years (the water value indicates how high a column of water the snow corresponds to when melted). (Credit: Finnish Meteorological Institute)

Warming surface temperatures are known to have driven substantial reductions in the extent and duration of northern hemisphere snow cover. Equally important, but much less well understood, is snow mass—the amount of water held in the snow pack—and how it has changed over time.

Millions of people rely on snow meltwaters for power, irrigation and drinking water. More accurate snow mass information would not only help to assess the availability of freshwater resources and identify flood risk, but also enable the better assessment of the role seasonal snow plays in the climate system.

In a new paper published in Nature, researchers from the Finnish Meteorological Institute (FMI) and the Environment and Climate Change Canada, working as part of ESA’s Climate Change Initiative, have reliably estimated the amount of annual snow mass and changes in snow cover in the northern hemisphere between 1980 and 2018. Their research shows that snow mass has remained the same in Eurasia and has decreased in North America, but the extent of snow cover has decreased in both regions.

The combined 39-year snow mass climate data record is based on passive microwave satellite observations combined with ground-based snow depth measurements. This allowed the team to narrow the annual maximum snow mass for the northern hemisphere to 3,062 gigatonnes between 1980-2018, with the peak snow mass occurring in March, while previous estimates ranged from 2,500-4,200 gigatonnes.

The team used this method, which corrects any anomalies in the data, and compared them to estimates from the Global Snow Monitoring for Climate Research, also known as GlobSnow, with three independent estimates of snow mass.