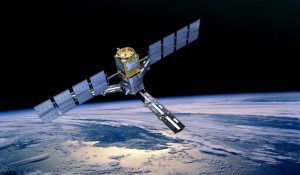 The SMOS mission makes global observations of soil moisture over Earth's landmasses and salinity over the oceans. Variations in soil moisture and ocean salinity are a consequence of the continuous exchange of water among the oceans, the atmosphere and the land”Earth's water cycle.

Salinity observations from the European Space Agency's Soil Moisture and Ocean Salinity (SMOS) satellite show that warm, salty water being carried north by the Gulf Stream meets the colder, less-salty water transported southward along North America's East Coast by the Labrador Current, mixing the water masses off Cape Hatteras. SMOS can distinguish between and follow the resulting eddies that are pinched off from the current and form little parcels of warm and salty water in the Labrador Current and the colder, fresher water in the Gulf Stream.

SMOS is able to monitor this process thanks to its high resolution and frequent revisits. This is giving scientists a new view of how salt is exchanged across current boundaries, a key to understanding the conveyor belt of global oceanic circulation. These and other scientific achievements from three years of the SMOS mission were presented at a conference held the week of Feb. 18 at the European Space Agency's European Space Astronomy Centre in Villanueva de la CaÃ±ada near Madrid, Spain.