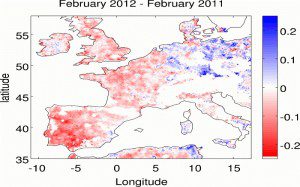 The trend of below-average rainfall across Europe has continued into the first months of 2012. Western Europe is experiencing a severe lack of water because of this trend. Concern about the deficit of water is rising across European countries and their respective water agencies, particularly in Spain, France, Germany and the United Kingdom.

The absence of sufficient water resources threatens crops, which in turn increases food prices and can cause a shortage of drinking water or affect industry by drying up shipping routes. Autumn saw particularly dry weather, disrupting shipping in the Rhine and Elbe rivers, and even sparking a forest fire in Bavaria.

The trend of low precipitation in Europe continued into the first months of 2012, reflected in readings from the SMOS water mission.Â Launched in 2009, SMOS looks at microwave radiation emitted from Earth to calculate the amount of moisture held in the surface layer of soil, up to a depth of about 5 cm.